By JAY DESHPANDE
January 26, 2009
Sign in to view read count 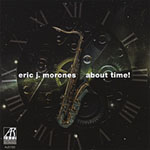 When Eric J. Morones enters his solo on "Nathan's Up," the first cut of About Time!, it's a little shocking what authority and gusto this first-time bandleader has. As well he should: a seasoned player, a well-published jazz educator, and a veteran of The Brian Setzer Orchestra, Morones has been playing on the Los Angeles scene for ten years. About Time!, as its title indicates, finally shows off his capacities as a leader and a songwriter.

"Nathan's Up" provides a rich introduction. The tune has a more produced sound than others on About Time!, and the warm, reverberating tone of Morones' horn here establishes a strong foundation for the band. So too does a highly simpatico rhythm section. Theo Saunders, a long-time staple of L.A.'s jazz scene, supports the sax solo with quirky and fleet-footed accompaniment. When Saunders takes his own solo, it's in the guise of a muscular Wynton Kelly, drawing colors rather than vocabulary from the older pianist's work on "Freddie Freeloader." Behind Greg Swiller's bass solo, drummer Bill Wysaske plays with attentive humor—at times thinning out his rhythmic support to only sparse traces on the ride cymbal, at other times cajoling with an implied hip-hop backbeat.

Morones' tenor sax typically has a light, nimble sound, almost reminiscent of an alto or soprano (he holds the alto chair with Setzer's band). His tone is clear and glib; although at this point in his career his sound lacks the gravitas of hoarier players like Ben Webster, Dexter Gordon, or Sonny Rollins, he has real range and expressivity, frequently reminiscent of horn men like Joshua Redman.

On "The Last Drive," Kye Palmer, the trumpeter featured on half of the album, introduces a new texture to the band, soon followed by Morones and Saunders, who in turn furnish their own harmonic environments during their solos. This track possesses the album's greatest variation and breadth; the ensemble's nascent potential is all here—they seem most free in their music-making, unconfined and unmediated.

The album closes with "Minor Matters," an excellent blues that recapitulates the group's full range of skills. After the melody bursts forth from a thundering drum intro, Saunders brings in a great solo, drawing lightly from McCoy Tyner (that god of the minor blues) while also taking the song in his own peculiar directions: small, focused clusters of ideas that press against the driving meter and fly into willful runs. When Saunders then drops out, and Morones begins his solo without piano backing, the song takes on a giddy, ascending feel that propels it to the album's close.

Conscious of diverse textures and a range of sounds, Eric J. Morones shows himself to be in every way a top-grade bandleader and a capable songwriter. About Time! signals a ready horn player with a great sound; now, one can only wait to see what he does with his music next.