By EYAL HAREUVENI
February 7, 2008
Sign in to view read count 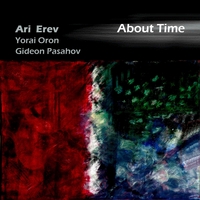 The debut recording of Israeli pianist Ari Erev offers his musical musings about time—the relationship between the fleeting time, the shaping of our memories and the perceptions that we all have about time and its implications on our lives. Erev testifies that his main influence is Bill Evans, and he performs regularly with a program, "Jazz from the Heart" that is based on the iconic pianist's repertoire. The thirteen compositions on About Time loyally represent Evans' insistence on clear song structure. Erev is accompanied by Israeli bassist Yorai Oron, one of the senior players on the Israeli mainstream jazz scene, and drummer Gideon Pasahov.

Erev manages to arrange a program that is coherent in feeling and approach, lyrical, melodic and carefully reserved. Some of his original compositions, such as the lovely "Fading Memories," are well-articulated, with a clear and elegantly developed theme, with enough room for his trio members—Oron more than Pasahov— to add their own comments. His arrangements of jazz standards—two by Evans and others that were part of his repertoire—and classic Israeli songs by singer/songwriter Shalom Hanoch and popular composer Nurit Hirsch, follow the same cautious and reverential approach, stressing melody over more daring exploration of the songs' inner architecture.

That approach is also the recording's weakness. After several tracks, it begins to feel as if feeling the trio's method of operation can be anticipated too easily, and that it's not going anywhere beyond its distinct comfort zone. It maybe unfair, on a trio's debut recording, to compare it with the defining legacy of Bill Evans, but it was Erev's conscious decision to interpret compositions engraved in memory with Evans, making it fair to wish for interpretations that would shed new light on such familiar standards.

Unfortunately, unlike Evans' great trios, Erev's group lacks the singular sense of immediacy, exploration or abstraction that defined Evans, nor the original and innovative musical language of Evans' musical partners including bassist Scott LaFaro and drummer Paul Motian. About Time offers one hour of lyrical ambience—quite often an elegant one—but, again, also a one-dimensional meditation on time and its perceptions.

Prelude: Anticipation (Short Version); Fading Memories; Song With No Name; Luigi's Muse; These Foolish Things (Remind Me of You); The Two Lonely People; Interlude: Anticipation; Waltz in G; It Could Happen to You; Past Desire; I Remember You; The Policeman's Ballad; Postlude: Turn Out the Stars.