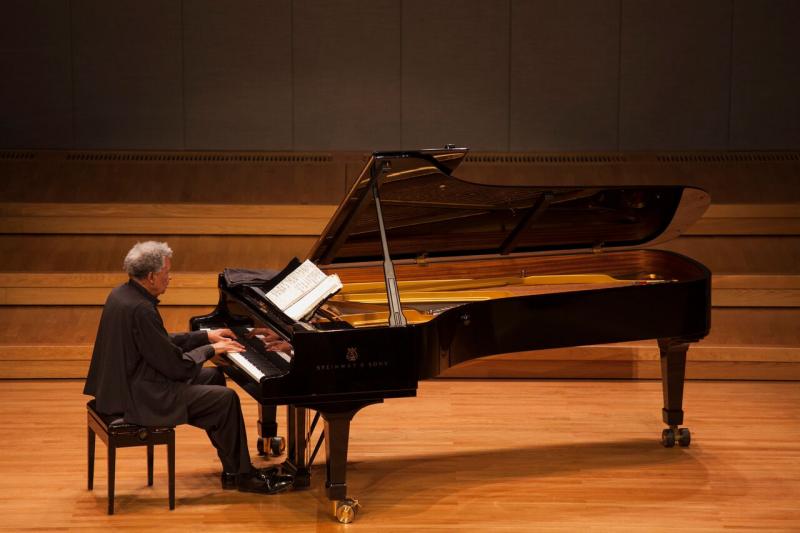 Alternately rhapsodic and episodic, pianist/composer Abdullah Ibrahim filled the airs of the 500- seat Universitetets Aula with melody upon melody, all of it improvised yet seemingly composed. The occasion was the 30th annual Oslo Jazz Festival, August 14-20, and Ibrahim was going it alone, a scheduled trio performance canceled due to rumors of a terrorist threat back in New York City, where his bandmates were airport-stalled.

A 75-minute, uninterrupted solo piano set, there were many grace notes gracefully played as Ibrahim seemed to be pouring his heart out to yet another sold-out festival crowd on this balmy, late-summer night on the campus of the University of Oslo. Mixing what seemed like a potpourri of influences from a certain wing of the jazz piano tradition, one could hear his always-present strains of Thelonious Monk, a dash of Duke Ellington, late- contemporary Mal Waldron, along with what has always been there in his rich South African heritage, the folk elements always close at hand.

Think Keith Jarrett, minus the proficiency, the technique replaced by a certain signature soulfulness that can only come from living life rich and full. Full of feeling, rich in experience (patience). And yes, a solo piano recital may seem simple but to this listener it once again revealed how exposed a true artist makes himself when heart, gut and soul combine with a voice unlike any other in the jazz piano tradition.

Like waves upon the sea, familiar themes surfaced only to be submerged in a new riff, a cadence, a mood contrasting, the pulse, vibe and intensity rising and falling with each new bar or phrase. Gradually or abruptly shifting between major and minor chords, this spontaneous composing felt so natural, and so personal, as if each listener was alone with Ibrahim in his favorite quarter, alone with his favorite piano. The reverb to the hall, the semblance of a church with mobile pews, the presence of 11 wall-to-wall Edvard Munch paintings, the spaciousness created by high ceilings and the sight of Greek columns, all of this atmosphere only furthered the sense that one was experiencing a once-in-a-lifetime event.

Ibrahim was in no hurry to pour out his soul, instead taking his sweet time, playing some blues-inflected chords only to be steered in the direction of a boogie woogie line or two only to be pulled over by a quiet meditation worthy of this spiritual setting, the playing throughout filled more with his signature plaintive chords than with the flash of right-hand arpeggios or blazing single lines. This was not bebop in the tradition of Bud Powell but a tradition nonetheless, one perhaps spearheaded by him alone. No surprise there. All of it imbued with a tranquility, a peace that comes from some other place ... a place of imagination chromatically rich beyond those four walls, a place known yet totally alien, or new or fresh, outside of time, style or fashion. Outside of time, this humble music was deeply affecting in its elegant, down-here-on-the-ground soulfulness, the room quiet as a church mouse, a cough not to be heard (until near concert's end).

There was an encore, a brief musical conclusion in response to a standing ovation. It was only then that this reviewer noticed the presence of sheet music on Abdullah Ibrahim's Steinway. Where did it come from? Was it there all along? And what purpose could it have possibly served for someone who seemed to be in a reverie of sorts, the notes spilling out from some intangible source hardly contained by pen and paper.