Abdullah Ibrahim at the Michigan Theater 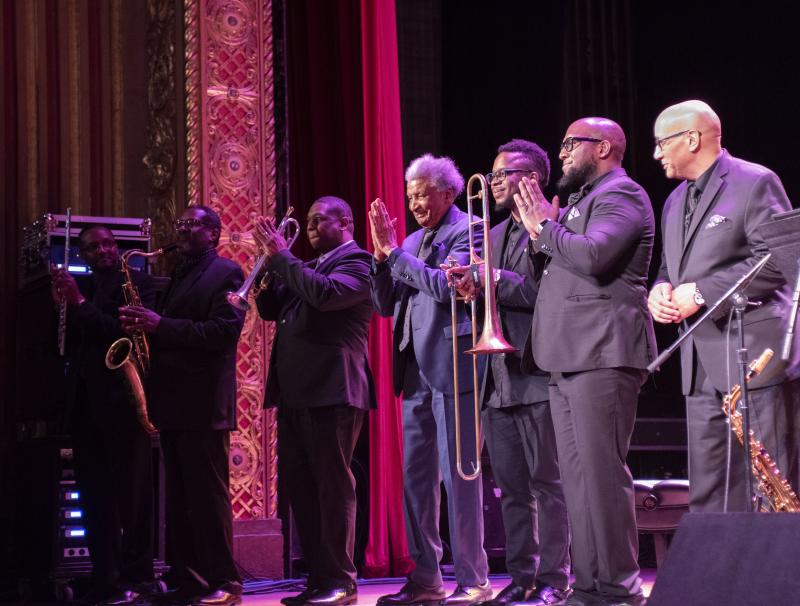 Back in the fall of 2015, the University Musical Society had the rare opportunity to present the legendary South African pianist Abdullah Ibrahim in one of his rare U.S. appearances. So when UMS announced last spring that Ibrahim would again return to Ann Arbor for their 2017-2018 season, it was cause for celebration. Upping the ante further was the prospect of including trumpeter Hugh Masekela on the bill. As the story goes, the pair had taken part in two massively successful concerts in Johannesburg during the summer of 2016. These shows were offered in tribute to The Jazz Epistles, the first black jazz group to record in South Africa. In addition to founding members Ibrahim and Masekela, the band included saxophonist Kippie Moeketsi, trombonist Jonas Gwangwa, bassist Johnny Gertze, and Makaya Ntshoko on drums.

While the original plan was for a series of international concerts running throughout 2017 and 2018, fate would deliver a different set of circumstances. After a long battle with cancer, Masekela passed away in January of this year. Much to the credit of both UMS and Ibrahim, the show went on and served as a dedication to Masekela's memory and the legacy of an important jazz ensemble. Featuring modern master Freddie Hendrix on trumpet, Ibrahim and his septet charmed the standing-room-only crowd of the Michigan Theater recently with a special evening of music.

Much like his first appearance at the Michigan, Ibrahim initially took the stage by himself for an introspective solo statement. Wearing his influences on his sleeve, the eighty-three-year-old pianist touched on many moods, effortlessly switching between styles. Chunky block chords a la Monk and possibly even a quote of "Light Blue" mixed spicily with classical counterpoint in a way that spoke volumes even in its delicate delivery. This moment then morphed into the aptly-titled "Dream Time" with Cleave Guyton's flute and Noah Jackson's cello joining the fold.

In a give and take manner that would serve as his modus opperandi for the rest of the show, remaining Ekaya members Lance Bryant (tenor sax), Marshall McDonald (baritone sax), Andrae Murchison (trombone), and Will Terrill (drums) joined with Hendrix to deliver Ibrahim's finely-tuned charts. Aside from a few punctuating chords delivered in sagacious spots, Ibrahim seemed content to serve as somewhat of an adjudicator to the proceedings.

By the middle of the performance, the intensity had increased in a manner consistent with the four pieces taken from the Jazz Epistles songbook. By contrast to Ibrahim's later work, this ensemble was patterned after Art Blakey and the Jazz Messengers and the material is understandably of the more aggressive hard bop variety. Over the course of "Dollar's Mood," "Carol's Drive," and "Vary-Oo-Vum," Hendrix impressed with his mercurial solos and his ability to channel the ebullient spirit of Masekela, which always seemed to serve as the yin to Ibrahim's introverted yang.

The iconic "Scullery Department" would also bring to the stage Detroit legend and Ekaya veteran Alex Harding. Having paid his dues in the bands of Julius Hemphill, Lester Bowie, David Murray, and Hamiet Bluiett, Harding's baritone saxophone speaks in blustery and incendiary tones. Indeed, it was his spark that lit up the remainder of the show with the obligatory "Water from an Ancient Well" capping off the evening like a Hemingway Daiquiri.

After the final notes decayed and the crowd rose to their feet, Ibrahim and cast gracefully accepted the house's genuine display of gratitude. With a sly sense of humor, Ibrahim seemed to take delight in pushing his sidemen out and back repeatedly for bows. It was yet another fleeting moment to be added to fond remembrances of an evening beyond compare.