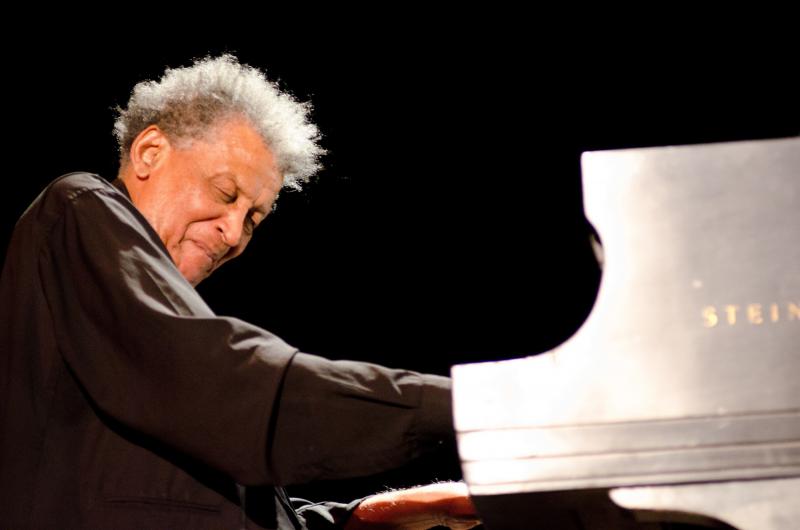 The opportunities to hear some of the remaining jazz legends outside of their home environs are becoming increasingly rare these days. In the case of pianist Abdullah Ibrahim, it is downright miraculous that this international icon left his home in Cape Town to make a rare stateside appearance. Add to that the fact that he decided to travel with his six-piece ensemble, Ekaya, and you have a once-in-a-lifetime experience for those lucky enough to be at the Michigan Theater recently on a seasonably warm Wednesday evening.

Ibrahim was better known as Dollar Brand during his time spent in the States back in the '60s working with Duke Ellington, Elvin Jones, and Hugh Masekela, among others. Traversing South Africa and Europe in the years to come, the pianist would form Ekaya in 1983 and he still finds the ensemble to be one of his most important forums, although the line-ups have changed over the years.

As the lights dimmed and Ibrahim took the stage, his quiet piano became the sole focus for much of the first fifteen minutes of the concert. Focused and deeply entrenched in his art, Ibrahim let the moment dictate his muse. As themes and melodies developed, the cello of Noah Jackson and the flute of Cleave Guyton, Jr. joined the fold, eventually followed by the entire ensemble. The flavors of Ellingtonia could be savored as Andrae Murchison delivered his trombone lines with a plunger mute.

One selection segued into yet another, with Ibrahim ushering in the spirit and feel of each section. Often, the pianist would drop out, better to soak in the musical stories of his bandmates. As the evening went on, it became clear that an ensemble of this size never quite sounded so deft and delicate at the same time. The harmonic lines and arrangements for the four horns were varied and fresh. Strains of Ellington and folk melodies mixed with angular lines akin to those of Thelonious Monk. On one piece, tenor saxophonist Lance Bryant even managed a quote of "Green Chimneys" during his boisterous solo. Elsewhere, the blues provided common ground, with Cleave Guyton's alto saxophone speaking in the vernacular of King Curtis or Lou Donaldson.

Ibrahim's playing seemed a tad restrained at times, although the way he started a piece and then turned it over to the group for further development made for a coherent arc to the performance. One of his most sublime moments came about midway through the set, as his locked hand chords delivered what sounded vaguely like "Fools Rush In." Like a flower unfolding, this eventually gave way to gospel-inflected runs complete with tremolo effects from both hands. Having said his piece, Ibrahim graciously allowed those sharing the stage ample time to make their own statements. It easily put the listener into a trance-like state that was unlike just about anything this reviewer has previously experienced.

Well past the hour and a half mark, the horns sweetly spoke their rich harmonies to "Turn Out the Stars" which then segued into the iconic "Water from an Ancient Well." Marshall McDonald's blustery baritone sax offered a fine tip of the hat that would lead to the conclusion of a highly spiritual performance. With the band stepping forward for their bows (not just once, but twice) and a standing ovation offered by the crowd, the mutual respect between artists and audience was immensely evident. At the age of 81, the odds that Ibrahim might make something of this magnitude happen again here in the States are obviously slim. Reason enough to cherish one special moment in time.