By DOUG COLLETTE
October 5, 2019
Sign in to view read count 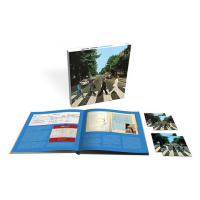 Deceptively less weighty than its 50th Anniversary counterparts, The Beatles' Abbey Road Super Deluxe Edition is nevertheless as revelatory in its own way as the previously-released milestone packages of Sergeant Pepper's Lonely Hearts Club Band (Apple, 1967) and The Beatles (Apple, 1968).

Yet comparison of the sets in their respective expanded forms is as misleading as likening the original albums to each other, an exercise in futility that only serves to camouflage how much this iconic band had to say at every juncture of its career. Furthermore, arguing the virtues of the 1969 album further disguises not only how the Beatles' collective voice was waning, but what an achievement was this final grand flourish of collective creativity (and how contrived appears the Get Back project in retrospect).

Inside the twelve-by-twelve slipcase and equally glossy hardcovers enclosing the one hundred pages of photos, essays and memorabilia, there is nonetheless comparably less unreleased material in the collection of extra demos, outtakes and alternate arrangements and video as appeared on the corollary packages. Yet this content, as with this title's predecessors, also includes a Blu-Ray disc that carries extra significance as a component of this title: 5.1 Surround, Atmos, et. al., corresponds to the technical enhancement the Beatles utilized in the studio to make this long-player in its original form.

Almost as much the demos, the 2019 remix of Giles Martin and engineer Sam Okell offers slightly greater clarity than that of the now-decade old CD sound, and, in so doing, reveals the quartet's continuing commitment to play as a band rather than simply layer on the instrumentation (though as careful perusal reveals, more than a little of that took place too). The technical team has reapportioned the instruments and voices to allow more space for them to resonate across the stereo spectrum. As a result, the display of the Beatles' performances becomes ever so slightly but significantly more illuminated: who knew the arrangement of "Here Comes the Sun," for instance, was so dense?

That essential pleasure of playing together formed the album's foundation to an even greater extent that during sessions for The White Album. And while overdubbing was hardly abandoned—side two's medley is a carefully constructed demonstration of the quartet's instrumental and vocal abilities— basic tracks invariably found the four playing their main instruments in a two guitars, bass and drums configuration. That it (mostly) all took place in familiar confines and the company of trusted engineers, with the late Sir George Martin eventually returning as producer, and with the utilization of long sought after studio equipment upgrades, was an undeniable flash-point of favorable conditions and circumstances.

By and large, the most memorable moments of Abbey Road consist of John Lennon, Paul McCartney, George Harrison and Ringo Starr singing and playing for and to each other, speaking an intuitive language not necessarily reliant on words (who exactly is it who will "Carry That Weight"?). Ostensible conventions of this record, such as the revival of three-part harmonies that grace "Because," were also a shield from distractions including Paul and George's outside productions, Ringo's movie career and John's various activities with Yoko in tow, all this in addition to worrisome business affairs. Thus, the focus of the Beatles is remarkable, a testament to their chemistry as well as the uncanny level of mutual inspiration upon which they capitalized during the aforementioned suite and "I Want You (She's So Heavy)."

Still, in meticulous perusal of the session outtakes and demos, the most devoted Beatles fans probably cannot resist indulging in some 'What if...?' scenarios concerning production and track sequence. With original manager Brian Epstein gone and their long-standing studio mentor present only for part of a project that began organically, no one in the inner circle had either the healthy detachment or generosity of spirit to suggest that perhaps Harrison's soon-to-be-standard "Something" might better be released as a single separate from the album (and perhaps with a more austere string arrangement!); the guitarist's "Old Brown Shoe" is certainly no substitute in terms of composition or production, but it's balance of emotional and instrumental drive would alleviate the stretch of arguable vapidity immediately following the other of Lennon's two most significant contributions, "Come Together."

A more mellifluous, less abrasive McCartney vocal on "Golden Slumbers" and/or the inclusion of his "Goodbye" (subsequently donated to Mary Hopkins' Apple Record) both sound like feasible alterations. The latter specifically would add more intimate acoustic textures as balance to extensive (albeit restrained) use of the Moog with which the group had so clearly infatuated. Meanwhile, the slight "Oh Darling" indeed was not worth the time spent on such an exercise in style for its own sake, while the frequently-repeated utilization of the Leslie speaker effect borders on the self-indulgent.

Still, within the timeline of the project as laid out in the multiple essays by Beatle historian Kevin Howlett, the most readily discernible element of continuity with that massive burst of creativity in the form of 1968's double set becomes manifest: how the individuals' respective personalities permeate their contributions. Lennon's word-play on "Mean Mr. Mustard" and "Polythene Pam" are as obvious as McCartney's predilection to be clever as an end in itself on "Maxwell's Silver Hammer" (which Ringo, the author of the child-like wonder that is "Octopus' Garden," redeems with his drumming). Meanwhile, Harrison continues his growth both as a composer and as an instrumentalist: his solo is clearly the most fluid in the three-guitar duel near "The End," even as it also exhibits the economy that always earmarked his playing.

Hearing the eighty minutes of session takes (previously-released likes of which the author cross-references to other such material here and that previously-release on The Beatles Anthology (Apple, 1995)) should inevitably lead to careful contemplation of Howlett's 'Track by Track.' The prose therein might well have been more enlightening without the inclusion of virtual transcripts of spoken interludes along with play-by-plays of processes like successive mix downs: what at first reads like fastidious attention to detail soon turns laborious. Yet neither his writing nor that of David Hepworth in his own passionate account of the cultural impact of Abbey Road (at the time of its release and in the interim) undermines the mystery of this creative process.

To be fair, even as the latter author speaks with as much affection as erudition, that pretense to profundity may for some music lovers taint the fun arising from immersion in all facets of this Super Deluxe Edition, from the candid photos right to the final posed shots along with lyric sheets and studio documents. The description of pivotal points like the move of "Her Majesty" to the end of the medley better illustrates the joyous serendipity at work here, all this in addition to the fastidious attention to detail the Beatles and George Martin afforded what they originally referred to as 'The Long One."

Instrumental interludes of brass and orchestration from that piece not only constitute rightful obeisance to the foursome's now deceased mentor (Giles' father), but prompt thought about how exactly the Beatles might have carried a formal concert presentation as they tentatively planned early in 1969. From the perspective of the 20/20 hindsight, this 50th Anniversary set provides—even with just scant reference to the extraneous and extenuating circumstances at the periphery of their activity in EMI studios—proof that it was altogether miraculous the lads ultimately made the unequivocal statement they did.

In truth, though, this focus was all in keeping with the uncanny instincts they displayed throughout their history, not to mention the supreme confidence, dating back to A Hard Day's Night (Parlophone, 1964), that resulted in no denotation of their name on the iconic cover photo. And titling the album was in itself an act of consummate good sense not to mention charitable affection, a magnanimous gesture of obeisance to their haven of creativity for the better part of their career.

In that respect, as the curators and producers of this package celebrated the half century that's passed since the release of Abbey Road (and hit a street date one calendar page after the original one), their own combined labor(s) of love took a cue from their subjects. With prescient maturity (and the last vestiges of camaraderie), the collective effort of the Beatles so evident throughout here now more than ever suggests how wise was their application of 'the less said the better.' There really wasn't much left to be said.