By RICH FRIEDMAN
December 1, 2003
Sign in to view read count 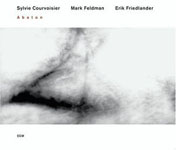 Abaton is a remarkable two-disc recording that is at once startling and mysteriously beautiful, gently pushing you into strange, good places. The music defies easy classification, which only adds to its appeal. The piano trio consists of Swiss composer and pianist Sylvie Courvoisier, jazz violinist Mark Feldman, and cellist Erik Friedlander. The first disc consists of four of Courvoisier’s written compositions, and there are 19 short improvisations on disc two.

It’s impossible not to be deeply drawn into this music or to listen to it dispassionately. Every note – be it a short pizzicato pluck of the strings, a long bowed note on the cello or a series of pounding piano chords – has an intense power. Because of the sparseness of the music, each sound takes on an added importance and beauty. Huge swings in dynamics and timing add to the tension of the music: passages of uplifting harmony are interspersed with attention-grabbing dissonance. The trio never seems out of control nor leads the listener too far in one direction, or into too familiar territory.

The piano, cello and violin are, of course, closely associated with classical trios. That begs the question: Is this jazz? In a recent interview Ms. Courvoisier is quoted as saying “I don’t care for labels... When you play improvised music, instantaneous composing is going on... every improviser is a composer.”

Ms. Courvoisier was born in Lausanne, Switzerland in 1968. She deeply admires Thelonious Monk’s music and studied Arnold Schoenberg’s work, to name just two musical icons who have influenced her compositions. Violinist Mark Feldman is no stranger to jazz. He has appeared on more than 100 jazz and improvised albums, last year teaming up with John Abercrombie on the wonderful album Cat ’n’ Mouse (ECM). Cellist Erik Friedlander has played and recorded with many jazz greats, including Fred Hersch and Marty Ehrlich.

Included in the nineteen short improvisations are three variations simply called Icaria 1, Icaria 2 and Icaria 3. Listening to all three, one after another, aptly reveals the subtle power of the trio’s expressionistic talents. A recurring theme runs through all three pieces – but in one version the violin becomes more prominent, in another the piano takes command, and in the third and the minimalist cello holds everything together. This is an immense achievement deserving recognition from both classical and jazz worlds. So much for labels.