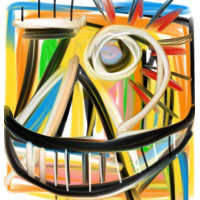 Since coming together as a group in 2012, Aaron Lebos Reality has forged a musical permanence in Miami's culturally diversified music scene, performing a wide range of jazz, funk, rock, R&B, Latin and world styles of music. Though guitarist Lebos, leader of the band, has several albums to his credit, the self-titled Aaron Lebos Reality is this group's debut recording and quite a first effort it is. As a guitar-led quartet, the jazz-rock sounds best describes the nature of the eight original pieces of the album. Driven by the rock-like guitar riffs from the leader, the theme here seems to be progressively electric in nature.

Born and raised in South Florida, and earning a musical education at the two premier universities in Miami (University of Miami and Florida International University), Lebos has performed with an extraordinary caliber of talented musicians of which his band mates in Reality are a part. When sampling "Yuenglish," the solo bass work of New Jersey native Eric England can be appreciated much in the same way the drumming prowess of Costa Rican-born drummer and educator Rodolfo Zuniga is on "Don Zuniga," penned most likely, as a homage to the stick man.

Last, but certainly not least, is pianist Jim Gasior, a longtime educator at Miami Dade College's prestigious New World School of the Arts, who demonstrates his mastery on the keyboards throughout but is especially pronounced on the eclectic "Emmalise." On their own, each member of the band just happens to be a much in-demand player in Miami's musical environment but, as a group, they are as much friends as fellow musicians and the latest musical group to make an impressive impact. Designed for a younger, adventurous audience, the tasteful progressive rock jazz produced by Lebos and Reality is hard-driving and energetic, not suitable for the ballad-minded soft tone-loving, old-style jazz enthusiast.

Lebos' composition may also lean a bit on the funk side of the scale, as the gyrating "9 to 5," with its hard measures and pulsating rhythms, strongly affirms. Lebos Reality goes out swinging with the striking, aptly titled finale, "Psychic DJ Strikes," the guitarist peeling off graceful riffs against the backdrop of Zuniga's pounding percussion; in a nutshell, electrifying!

Aaron Lebos and Reality makes its first of what will hopefully be the beginning of many magical musical statements with its audacious debut; delivering the best in the tradition of the rock/jazz sound, this is one reality that's wired and fired up for a hot musical charge.