Aaron Heick: From Sting to Spiderman 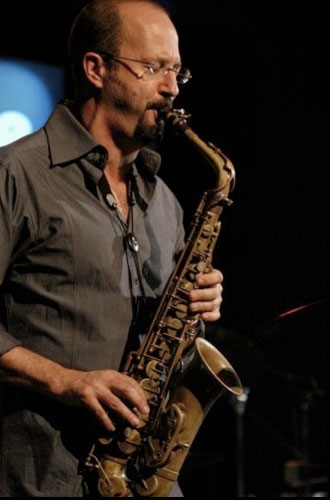 Outside of the New York music scene, multi-instrumentalist Aaron Heick's name may not be as well known as some of his colleagues. But it doesn't matter; he's had a rich, varied career. This well-traveled, seasoned pro has played with some of the most prominent musicians in jazz, pop, reggae, funk, world, and classical music. Those who really know what's going on in music know him.

In 2010, Heick released the well-received, wonderfully melodic Daylight & Darkness (Self Produced), a pretty fine illustration of what he's into these days—although he plays down some of his many musical influences on it. "I tried not to fall into the trap that some people have," Heick explains, "that musicians have to show everything you can do, so you end up with this totally schizophrenic album. I was aware of that, so I tried to create threads to hold the thing together, certain textures and instrumental things."

Lately, the reed player/composer can be heard playing in the orchestra of the controversial Broadway musical production Spiderman: Turn Off The Dark, performing the music of U2's Bono & The Edge. The show has reportedly been plagued with technical mishaps including injuries to cast members, regular updates of the show's score, and the firing of director Julie Taymor. "The controversy surrounding the show hasn't really affected me that much," says Heick. "I feel like I read about it just like everyone else. Anyway, it all seems a little overblown to me."

Yet, if you asked Heick about some of the more interesting musical experiences he's had in his career as a jazz-based journeyman musician, he might sound more enthusiastic, bringing up familiar names like Barbra Streisand, Donald Fagen, Chaka Khan, and Sting, recently accompanying the rock idol in a special concert held at the legendary Apollo Theater. "Sting has such an appreciation for jazz," Heick says, "that most of the things I've done with him have an element of that [jazz] already in there."

Of Fagen, with whom he contributed to a horn section for an upcoming solo CD, Heick explains, "He's very efficient and exact in the studio. The attention to detail is amazing. And he's a funny guy, too." Accompanying Streisand on tour, Heick had another take. "That was completely different. The musical director had these beautiful, great lush arrangements for a 58-piece orchestra, where every note was written. No improvising, no nothing."

How does Heick find this fulfilling musically "If there's something worthwhile in there, if there's something good, it's satisfying," Heick says. "And also, if you're playing with really good musicians, there's plenty to latch on to. If that was all I was doing, it might be less satisfying. I think one of the keys to success and to be happy is variety. Sometimes I'd do a gig like that and come back into town and play with African bands, where I'll just blow all night doing a D minor chord. It would just be about the groove. Totally another thing."

A consummate professional on his instrument, Heick sometimes plays in classical orchestras. Responding to a story about Wynton Marsalis, who once said that stepping away from playing classical music for some time required him to have to go back and woodshed (practice), Heick agreed: "Some things are like riding a bike. You never forget. Like in funk music. But with classical, if you haven't played in a while, you do have to practice, physically, if you want to get back there. It's like being an athlete. If he's out a few weeks from an injury, he can rehabilitate, and he may get to the point where he's in shape, but not game shape. It takes time to get into the finesse of classical music, the subtlety."

Is there a style of music he most loves playing? "I enjoy anything that's being done really well," Heick enthuses. "When all the musicians understand what we're doing and there's a kind of symmetry and mutual regard and respect, cohesiveness, where everyone is doing it right. Hopefully, where there's a creative element to it. That's even better. In jazz, that means improvisation, but in reggae, which I've also played, it's almost closer to classical. Bob Marley's band, The Wailers—that band; that band is amazing. The music is so well orchestrated. And everyone's role is so defined and played so well with each other. That's the kind of thing I love the most."