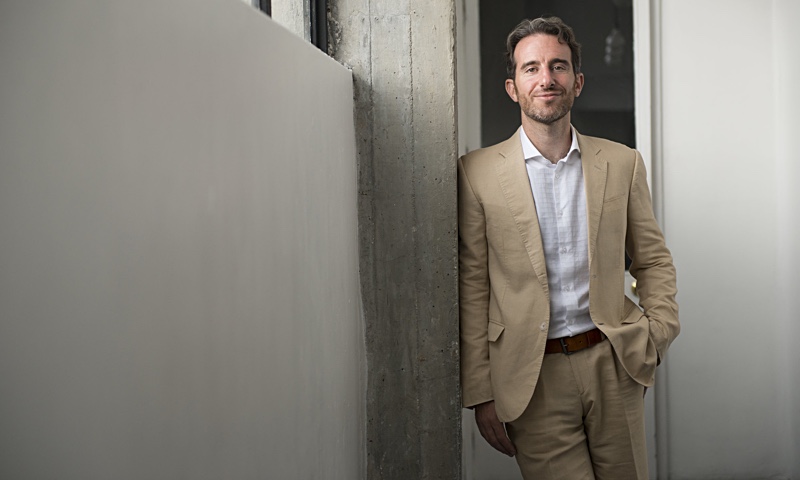 It was a rollicking evening set full of jaunty rhythms and good humor. Aaron Goldberg clearly relished the rich sound of the Steinway and the feel of the room. A packed crowd had come out to unwind at the end of Black Friday—probably the fullest audience this two-year-old concert series has had to date—and the affair felt like the friendliest informal holiday party you could ask for. With some classic bop and stride, a generous dose of Latin soul and a feel for deep simple beauty, the trio swung through a fun mix of classic standards interspersed with pieces from the roughly two-week-old release At the Edge of the World (Sunnyside, 2018).

As on that album, Leon Parker took the chance to get down and expand his role with beatboxing and konokol-like scatting—all part of his legendary kitchen-sink approach to everything percussive. Toward the close of the first set, the group began drifting more and more quietly until the room was almost pin-drop still. Goldberg tapped some steady high notes that chimed and rang in the air. After a moment it became clear why the groove was sounding different. Parker had set down his drumsticks and started playfully slapping his hands against his legs and chest instead.

It was the kind of thing that wouldn't work so well at a boisterous club show, but that was precisely the point. @exuberance is a house salon that's all about offering an antidote to noisy PAs and audiences chattering over drinks. In this beautifully cozy space in the city's northeast Fishtown neighborhood, the events are all about the performance itself: house rules are to give respectful attention with no talking, photography or fiddling with phones. It's a lovely reminder of what's too often missing in more common commercial spaces (and an excellent wine selection certainly doesn't hurt either).

Still, the room's communal spirit was no less generous than the one between the players. Matt Penman contributed a wonderfully supple blend of finesse and bouncy low-end swagger—and not to overlook his fine contributions, but the largest share of the magic came from Goldberg and Parker's interplay throughout. In a show full of catchy grooves, the collective rhythmic play was always a pleasure. Parker's "EmbodiRhythm" approach made a fun return at the end for a dancing, slapping, stomping finale that left the whole room laughing.

As sharp and tricky as their interplay may have gotten, good humor was the quality that stood out among the band most of all, whether paying affectionate tribute to Bobby Hutcherson, honoring the pianist's longtime colleague Joshua Redman or weaving a meditative "Tokyo Dream." Their palpable connection couldn't be missed in a room where nobody sat more than twenty feet from the players—as Goldberg would doubtless be the first to agree, there's really nothing like sharing the experience directly in the now.