Harry Skoler: A Work of Heart 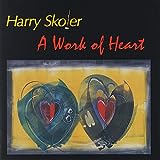 On his 1999 album A Work of Heart clarinetist/composer Harry Skoler opens his repertoire and his orchestral possibilities as wide as his heart, letting in new people and new ideas. In addition to his trusted rhythm section of bassist Richard Kimball and drummer Tim Gilmore, Harry adds the formidable talents of neighborhood fret-master Garrison Fewell and pianist/arranger/producer Donn Trenner—who has also worked with other reed masters like Stan Getz and Charlie Parker, as well as Tommy Dorsey, Lena Horne and Skoler’s label-mate Paul Broadnax. On a few selections, Skoler lets a hand-picked string section help him express his heart.

Though Skoler’s occasionally squeaky but always emotive style shows in duets like "Soliloquy" (which he wrote with Trenner), his mature sensitivity comes through most in broader arrangments in which Skoler steps back or even out completely in order to let his talented friends have time to shine. Skoler’s tributes to his children define an interesting contrast, for while "Cosia Feita" uses Ellingtoned aprpeggios to depict Skoler’s spunky daughter, "Portrait of Daniel" is a sweet and (Mani)low portrait of a day in the park with his darling son. Covers of Jobim’s "Don’t Ever Go Away" and Porter’s "Ev’ry Time We Say Goodbye" further demonstrate both the depth and the width of Skoler’s musical heart, as does a stroll through "Estaté" taken just for his wife. The broad, string-supported themes of "Goodbye Mr. Evans" (a tribute to Bill) and the percussive and slightly cheeky "Sophisticated Yenta" are wonderful and impressive. Still, it is Harry’s smooth, oaken woodwind that will leave you pining for more.