Tina May: A Wing and a Prayer 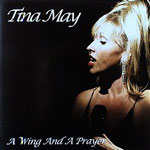 Even though she has over ten discs to her name, Tina May is still little known in the wider jazz world. A regular performer in clubs and arts centres in Britain and Europe, she has never had the major label backing that seems to be required to catapult a jazz singer into the public eye.

For those who have heard her, this is something of a blessing. Recording mainly on the small 33 Records label has allowed her to develop without the pressures that star status might have imposed. The result has been a string of excellent albums using outstanding instrumentalists like Don Weller, Alan Barnes, Tony Coe and Dave Newton, each one centred on the American songbook, but with the added surprises of vocal adaptations of jazz tunes and the occasional foray into French (for a whole album on Jazz Piquant!).

On A Wing and a Prayer, May is supported by just two instrumentalists. Nikki Iles, her pianist of choice for some years, is a beautifully lyrical player from the John Taylor school. Reedsman Stan Sulzmann is one of the quiet heroes of British jazz, with a reputation stretching back to the 1960s. Together they have made a record of quiet introspection that''s dominated by songs of loss and longing.

The boppy voice and piano duet on "Maybe September sets the mood, and Sulzmann provides immediate contrast, his simultaneous tenor weaving around the vocal line. All three musicians take "Who Can I Turn To? well away from Broadway self-pity into a spirited jazz exploration, with particularly fine piano from Iles. "Too Late Now and "Turn Out The Stars explore the bleak downside of relationships, greatly benefiting from the sparse instrumentation. "When in Rome brings a few moments of comedy to lighten the overall mood.

However, the tracks that really stand out are Tina May's own vocal interpretations of two very different jazz tunes. Joe Henderson's "Black Narcissus, re-titled "Blue Narcissus, emerges as a striking demonstration of her almost perfect pitch; she hits the notes without wavering during some extremely difficult chord changes. The title track, "A Wing and a Prayer, takes Kenny Wheeler's gorgeous "Gentle Piece and turns it into a pastoral ballad with ethereal, breathy flute. On an earlier album May shaped Bobby Watson's "Time Will Tell into a heart-stopping vocal performance; the two adaptations on this CD further suggest that jazz singers seeking fresh repertoire should be giving May's recordings a listen.

A Wing and a Prayer is much more than just another CD from an aspirational singer. It's a superbly crafted piece of work from three top-flight musicians who work together as an integrated jazz trio. Listen to it as you would listen to a piano or saxophone trio—it repays that sort of concentration.

Maybe September; You'd Be So Nice To Come Home To; Who Can I Turn To?; Sunshower; Too Late Now; Blue Narcissus (Black Narcissus); Turn Out The Stars; When In Rome; A Wing And A Prayer; Easy To Love; A House Is Not A Home.