Aki Takase: A Week Went By 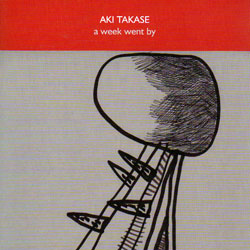 Across its nine varied tracks—five trio, three solo, one duo; all improvised—A week went by documents pianist Aki Takase's visit to Gateshead in June 2008 to play the On the Outside festival. The album opens with three trio performances, on which Takase is joined by double-bassist John Edwards and drummer Tony Levin. They are fitting company to complete this trio, as Takase easily straddles the territory between jazz and free improvisation—territory in which Edwards and Levin are both experienced and comfortable. The bass and drums never opt for the role of rhythm section but are equal partners alongside the piano; at any moment, any one of the three is as likely as the others to step forward and steer proceedings.

Takase frequently operates in areas where it is difficult to tell where her influences end and her own creativity begins—is she quoting or is she spontaneously composing? But, ultimately, the question is academic when the music is this dynamic and free- flowing. Throughout the album, she is prone to employ rhythms and sounds reminiscent of those of trains—a sign of her familiarity with the history of jazz piano— and which give the music irresistible momentum. The third trio piece, "Steinblock," is a prime example, with Edwards and Levin responding in kind.

After the intricacies of the trio performances, the nine-minute "Just drop in" is simpler by comparison, pairing Takase with legendary saxophonist John Tchicai. This cannot be described as a duo or a duet, as throughout the track the piano and saxophone relentlessly solo in parallel and their lines intertwine. It works because Tchicai shares Takase's attitude to jazz, being happy to weave recognizable quotations into his soloing. Takase matches him, finding ways to complement his flow of ideas without reining in her own creative flow. The end result is a high-energy outpouring that raises hopes that these two will co-operate again, maybe on an entire album.

The remainder of the album consists of further trio tracks and solo performances. Alone, Takase reveals further facets of her playing, able to be more restrained and reflective than when playing with others; her solo playing has more peaks and troughs. On "Ima wa Mukashi" the railroad effect recurs and Takase's use of preparations produces metallic percussive sounds alongside her conventional playing, creating the illusion that a percussionist is present—so much so that listeners may be checking the credits! The album closes with a delicately beautiful solo piece, "Yumetamago," which is less percussive than much that has preceded it and serves to highlight the range of Takase's playing across the album.