Darrell Katz and the Jazz Composers Alliance Orchestra: A Wallflower In The Amazon

By BRUCE LINDSAY
September 13, 2010
Sign in to view read count 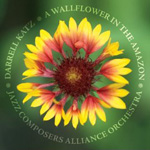 The Jazz Composers Alliance Orchestra has been part of the Boston music scene since 1985, and A Wallflower In The Amazon is the eighth album in the group's history. Darrell Katz, the Orchestra's Director, has been involved since the beginning: his arrangements on this album draw on this experience to showcase the individual talents of the Orchestra's members, while also drawing them together in some complex but accessible ensemble passages.

Rebecca Shrimpton delivers a beautiful vocal performance on Duke Ellington's "I Like the Sunrise," interweaving her voice with Natalie Dietrich's subtle vibraphone, as well as with the more assertive horn section. Her other performances require her to sing the lyrics of Paula Tatarunis; it's not easy, and Shrimpton often struggles with the task. "For Our Sins" works fine; the short and relatively straightforward lyric has a clear, if rather downbeat, message; but the other songs fare far less well.

"Visiting My Aunties" has a great arrangement from Katz, but the lyrical conceit—the Aunties are not favorite relatives, but a succession of "antis," including anti-toxins, anti-social, anti-thesis and even anti-disestablishmentarianism—is weak. The lyrics to "A Wallflower in the Amazon" are particularly convoluted and obfuscationist, and Shrimpton struggles, forgivably, to deliver lines like "Even the shadows were sphinctered." By contrast, organist Mike Finnigan makes the most of the sharp, image-laden lyrics on Willie Dixon's classic "Hoochie Coochie Man" and Big Maceo Merriweather's "Tuff Luck Blues," with some suitably rough-edged and entertaining vocals.

The album is much more consistent musically than lyrically, thanks, in the main, to some excellent solos. "Tuff Luck Blues" features suitably atmospheric solos from Finnigan on Hammond B3, Mike Peipman on trumpet and Alan Chase on alto sax; David Harris' trombone solo on "It Brings New Hope They Say" is loud, brash and hugely enjoyable; Bill Lowe delivers a richly-toned and dexterous tuba piece on "All Bark and No Bite." Drummer Pablo Bencid and bassist Alex Smith don't get the chance to step into the spotlight, but they are consistently excellent, ensuring that the lead instruments have a solid rhythmic base.

A Wallflower In The Amazon succeeds as a recording through the strengths of the musicians and Katz's arrangements. The original songs, however, compare unfavorably to the work of Ellington and Dixon, and diminish the album's impact—a pity, because there is plenty of fine musicianship to enjoy.

I Like the Sunrise (It Brings New Hope They Say / I Hope It Likes Poor Me); Red Blue; A Wallflower in the Amazon (Aromatic Raptures Of Volume / The Vanishing Point); Hoochie Coochie Man / All Bark and No Bite; Visiting My Aunties (A Classical Freudian Hysteric / I Promise I Will Never Laugh Again); Tuff Luck Blues; For Our Sins; The Red Blues.