Nick Grondin: A View Of Earth

By LJUBINKO ZIVKOVIC
October 1, 2019
Sign in to view read count 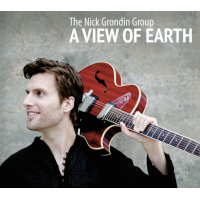 As a guitarist, nowhere are you more exposed than in jazz, particularly if you aim for that clean, Wes Montgomery, Kenny Burrell, Grant Green sound; elsewhere, particularly in pop and rock, the riffs, add-ons, the band, even studio wizardry can cover the lack of skill or mistakes. And then, unless it is a solo guitar album, you certainly have to have a band that will match the quality of the playing you exhibit.

Based on the evidence of his latest album, a View Of Earth, Boston Area guitarist-composer Nick Grondin strives exactly for that sound and, along with his band, comes out as a clear winner! Belonging to a younger generation of performers and composers, Grondin has been around, performing regularly in the Boston Area, the US and Europe, but also with artists like Bob Moses, Dave Holland and Joshua Redman.

What Grondin exhibits on this album is a great sense of melody and soloing, never attempting to dominate proceedings but knowing exactly when to show his feel for the guitar and how much of the skill fits the song at hand—exactly what he does on the opener "Ships Passing," for example. It makes no difference whether it is one of his compositions or a cover, like the excellent version of U2's "I Still Haven't found What I'm Looking For," for which he obviously has a penchant—no wonder, since Grondin won the 2008 DownBeat Magazine Student Music Award for Best Arrangement of "Strawberry Fields Forever."

Throughout the album, Grondin lets all the players stretch out, and they reward him with some excellent playing, particularly Tucker Antell on saxophones. A particular standout is "So Close So Far," where almost everybody gets a chance to shine, and Grondin and vocalist Aubrey Johnson, show what they are made of.

What we get in "A View From Earth" is a melodic jazz album that at the same time can be pleasing to the ears of a wider audience and still keep the integrity of jazz playing and composition. In some ways, it shows what the dreaded 'smooth jazz' category should actually sound like.