Shauli Einav: A Truth About Me 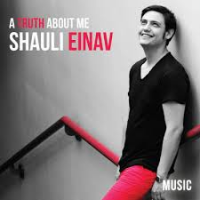 A quick glance at the song titles on Shauli Einav's third album A Truth About Me reveals a narrative thread concerning restlessness and movement. Song titles such as "Embarcadère," "The Traveler," "Nomads," and "Le Musketeer" suggest that Einav's musical inspirations are tied to journeys; both his own and others.' Listening to A Truth About Me, with its relentless, forward-leaning rhythmic drive (courtesy of the dynamic Paris-based rhythm tandem of Louis Moutin and Florent Nisse), reinforces this impression. And it's no surprise, considering the Israeli-born saxophonist has moved from Tel Aviv to Rochester, NY (where he attended The Eastman School of Music), to New York City, and now to Paris, all in the space of a few years. Einav's an adventure-seeker whose music literally bursts with energy and inventiveness. For example, the spinning carousel of 12-bar solos on "Circa 1988" imparts a feeling of frenzied, near-constant activity, as do the seemingly endless variations of the tune's melodic motives.

Einav's compositions, like those of Dave Holland and Henri Texier, are busy and multi-layered, yet tuneful; sunnily energetic and swinging yet replete with sly rhythmic and harmonic changes that subtly hint at darker moods. It's a diverse lot as well, with allusions to folk, classical, funk and free-bop. "Circa 1988" blends math-y energy and ethnic nuances resulting in a hybrid sound that could be described as Israeli acoustic jazz-rock. "The Traveler" is a hard-charging straight-ahead bop tune with lots of harmonic motion and a turnaround in three-four; soloists Andy Hunter and Paul Delay clearly have fun with the changes. Moutin and Nisse lay down some mean funk on "Le Musketeer," and negotiate the tricky head and ensuing rhythmic modulations with jaw-dropping artistry.

The album's longest piece, "Nomads" starts off with what sounds like a particularly devilish saxophone exercise, but quickly develops into a (mostly) minor-key multi-sectioned piece that alternates between a medium tempo syncopated post-Coltrane 6/8 feel and an almost classical-sounding horn chorale taken at a somewhat slower tempo. It's really lovely, and Einav's impassioned solo is riveting. Antonin Tri Hoang's flowing bass clarinet augments the ensemble on "One for Alex," an almost meditative piece that revels in off-kilter harmonies. Einav's tender soprano solo shows a different side of his musical personality.

As he's proved on his previous releases Opus One (Plus Loin, 2010) and Generations (Posi-Tone, 2012), Shauli Einav is a remarkably complete musician, a virtuosic soloist with a lush sound on both soprano and tenor whose compositions are daring and deep.

Embarcadère; Circa 1988; Copenhague; The Traveler; Nomads; Eleven Fifty Two; One for Alex; Le Musketeer; Ultramarine; A Truth About Me.