A Tribute to Sly and the Family Stone's Stand! at the Fox Theater 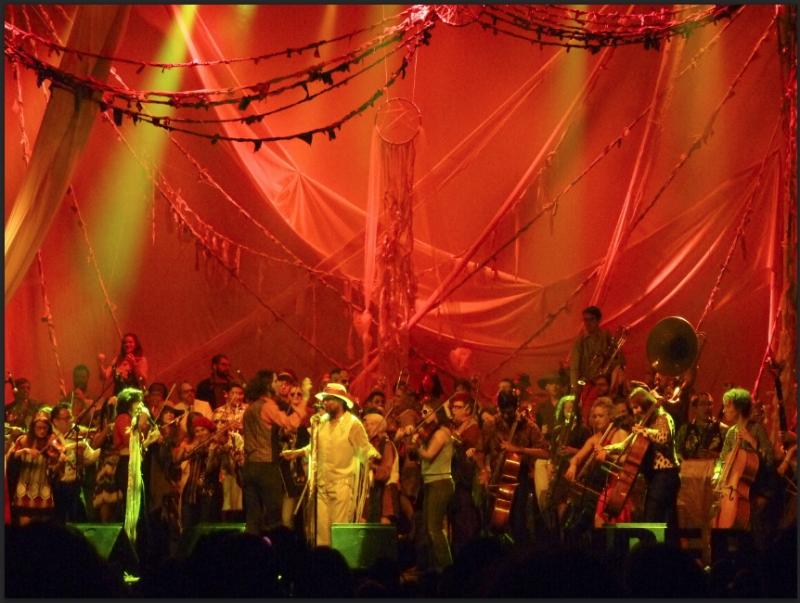 Jazz aficionados might not think that funk, soul, R&B and rock combo Sly and the Family Stone would have links to contemporary jazz, but the connections are, in fact, surprisingly strong.

Sly and the Family Stone was groundbreaking in so many ways: it was the first band of its kind to include both male and female performers; and unlike the many Motown-style bands which, preceding the group, were fronted by singers with identical coutures, each of Sly and the Family Stone' members dressed in an inimitable style of their own choice. In that sense, they paved the way for female jazz drummers, pianists, bassists and other instrumentalists who, when appearing alongside their male counterparts, now often dress as it suits them. Founder Sylvester Stewart (Sly Stone) and brother Ronnie were the children of ministers, and the offshoot band Little Sister got its start in gospel. Similarly, many formidable jazz musicians possess deep links with the church tradition.

But the links run even wider and deeper. The late Miles Davis admired Sly Stone and used his music as one of the inspirations for the trumpeter's classic (and widely criticized) On the Corner (Columbia, 1972). Herbie Hancock's Head Hunters (Columbia, 1973), perhaps the signature jazz funk album of all time, was also influenced by Stone's music, as was the jazz-funk of legendary drummer Ronald Shannon Jackson's Decoding Society.

While the original Sly and the Family Stone disintegrated into acrimony after the release of its fourth album, Stand! (Epic, 1969), that recording still sold more than three million copies and remains one of the finest rock/pop albums of all time.

Stand! has long been such an influential album that hip hop and R&B producers alike have loved to sample its tunes, either looping or chopping up tracks including Gregg Errico's drum parts from "Sing a Simple Song" and "You Can Make It If You Try." Artists such as LL Cool J, Digital Underground, Ice Cube and Arrested Development have either borrowed (or plagiarized, depending upon one's vantage point) from Sly and the Family Stone' sound.

On this particular evening, UnderCover Presents rented the fantastically renovated Fox Theater for an extraordinary concert that definitely brought Sly and the Family Stone' music higher.

First up was Möscheler's appropriately named Awesome Orchestra, performing Stand! 's title track. 21 violinists took the stage, alongside 10 cellists, 10 violists and six acoustic bassists. Many other instruments—ranging from tuba, oboe and harmonium to guitar and drums—were all part of the mix. This band had it all, as a lead vocalist clad in white sang: "Stand! At the end you'll still be you. All the things you set out to do."

A grand piano was wheeled out for Mik Nawooj, the Korean immigrant leader of the innovative Korean fusion group Ensemble Mik Nawooj, which brings hip hop, classical and pop elements together in an unforgettable mix. This ensemble chose to abstract the unforgettable song about racial prejudice, "Don't Call Me Nigger, Whitey." As Sly Stone's younger brother, Freddie, said earlier in the day at an afternoon symposium, "It does not matter what color someone is who cares for you when you are in need."

Zakiya Harris and the seven-member Elephantine then elevated things with "I Want to Take You Higher," a song about philosophical elucidation as opposed to intoxicant-induced inebriation. The number featured ardent hand-clapping; lively hip hop vocals (executed by Zakiya and involving leaps in the air); bassist Kevin McCann, with his prodigious beard; and Elia Vargas' amazing visuals, created by the show's visual coordinator on the theme of "Black Lives Matter."

Marcus Shelby was up next. The local acoustic bassist and jazz historian was introduced by Luke, who commented that "Marcus Shelby truly cares about his neighborhood." Singer Tiffany Austin appeared with Shelby's quintet, while radio station KPFA's Rickey Vincent commented onstage that "I run out of things to say [when it comes to talking about Austin]." The group launched into a marvelous version of "Somebody's Watching You," as electric bassist Ila Cantor took a solo and young up-and-coming pianist Joe Warner proved himself a formidable presence on the 88s.

Following a presentation to former members of the band by the City of Oakland (Sly himself being notably absent), the 13-member Latin, funk and reggae band Bayonics took the stage to perform the unforgettable "Sing a Simple Song"—"a simple song that is not so simple," in the words of funk music expert Vincent. A horn section, two rappers and a vocalist, trumpet, and energized keyboard made it all happen. A heavy-handed drum solo climaxed with flickering strobe lights.

Then it was Tumbleweed Wanderers' turn (the most traditional rock band to play that evening), launching into an orchestral "Everyday People." Preceded by a Queen-style intro, the tune featured a command for everyone to execute "a big-ass hug" with one's neighbor; the audience largely complied.

Soul and R&B combo Con Brio renamed the lengthy "Sex Machine" as "A Sex Supreme," a version that included elaborate hijinks including a singer dancing behind a suspended sheet and a lead singer who invoked Martin Luther King before calling on those in attendance to "buy our EP, to be released on Valentine's Day."

Will Magid & Everyday People were joined by the white-hatted former Sly and the Family Stone bassist Rustee Allen for an intrepid version of the instrumental outtake "My Brain (Zig-Zag)." A seething mix of funk and hip hop, the tune featured co-leader Kevin Wong on Moog synthesizer. A version of "If You Want Me to Stay," not included in the printed program, was an unexpected addition. The group wanted to do the tune as it was the number most associated with Allen, as the popularity of this Sly Stone missive to his then-future wife (which had been a huge hit in 1973) had much to do with Allen's bass lines, and the group had recently been recording a new rendition with rapper Tia Nomore.

Last up was the album's finale, a rocking version of the optimistic "You Can Make It If You Try," by Jazz Mafia & Crossroads Collective. Saxophone, trumpet and trombone were supplemented by violin, guitar, keyboards, bass and drums."

The curtains closed and reopened again, as all the musicians joined together for an amazing version of "Dance to the Music," trombones and tuba alike rising in the air above the mêlée, followed by the smash 1969 hit "Thank You (Falettinme Be Mice Elf Agin)." With this, the nearly three-hour extravaganza came to a rollicking conclusion.

Earlier that afternoon, former band members and chroniclers of the band assembled for a four-hour marathon series of panel discussions in the neighboring Den at the Fox. The afternoon's highlight came with an appearance by the 71 year-old Sly Stone, who was welcomed with an incredible fanfare and held a question and answer session, his answers on the cryptic side of the equation. Other ex-band members held forth as well. Freddie Stone was particularly articulate, holding forth about the songs and the times of which they were a part, even riffing on "Don't Call Me Nigger, Whitey" and other classics. And it is no wonder: following in the footsteps of his father, he is now Pastor Frederick Stewart at the Evangelist Temple Fellowship Center in Vallejo and continues to tour and record.