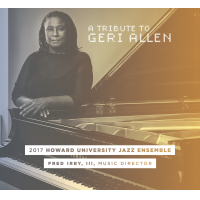 Pianist / composer Geri Allen, one of the Howard University Jazz Studies program's distinguished alumnae, left us far too soon, succumbing to cancer on June 27, 2017, two weeks after her sixtieth birthday. During a career that spanned more than thirty-five years, Allen performed and recorded with a who's who of renowned jazz artists from Ron Carter, Ornette Coleman, Greg Osby and Jimmy Cobb to Charlie Haden, Kenny Garrett, Paul Motian, David Murray and many others including her husband and fellow Howard alum, trumpeter Wallace Roney. At the time of her passing Allen, a noted educator as well as player, was director of the Jazz Studies program at the University of Pittsburgh.

On this heartfelt and heartwarming tribute to Allen, director Fred Irby III's 2017 Jazz Ensemble opens with half a dozen amiable jazz standards before the 1989 ensemble revisits Ornette Coleman's ethereal "Kathelin Grey." The album closes with a trio of Allen's early compositions performed in 1977, '78 and '79 on which Allen, then an undergrad, sings ("A Communion to My Soul") and plays piano ("For Real Moments," "Give the Band a Hand"), and on the last of which Roney is among the featured soloists.

As the testimonial is to a pianist, it is appropriate that the 2017 ensemble's own talented keyboard artist, Tristan Ledale Benton, is showcased on every one of them. After opening with Thelonious Monk's burnished "Bye Ya," the well-drilled ensemble glides easily through Billy Taylor's "Easy Walker," Hank Mobley's "This I Dig of You," Bobby Hutcherson's "Little B's Poem," Horace Silver's "Doodlin'" and Johnny Griffin's "The JAMF's Are Coming." Good as Benton is, solo piano honors must go to Allen herself who dazzles on "Communion" and the more animated "Give the Band a Hand," showing great promise of worlds yet to conquer. The 2017 ensemble's other able soloists are electric guitarist Theodros Alemu, bassist Eliot Seppa, trumpeter Aaron Broadus, tenor saxophonist Antonio Parker and trombonist Jarvis Hooper.

As tribute albums go, this one is well-deserved, straight from the heart and well worth hearing and appreciating.

Bye Ya; Easy Walker; This I Dig of You; Little B’s Poem; Doodlin’; The JAMF’s Are Coming; Kathelin Grey; A Communion of My Soul; For Real Moments; Give the Band a Hand.