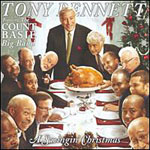 You'd think that a holiday season dedicated to love and laughter and home and family would be a frequent subject for the comfortable, familiar and warm voice of a singer like Tony Bennett. But A Swingin' Christmas: Tony Bennett Featuring the Count Basie Big Band is only the venerable vocalist's second holiday-themed album, and his first since Snowfall (Columbia), which was originally released forty years ago in 1968 and then remastered and reissued with a bonus track in '94.

At its core, A Swingin' Christmas is Bennett with a quartet—bassist Paul Langosch, guitarist Gary Sargent, drummer Harold Jones (a veteran of several Basie Band recordings) and pianist Monty Alexander. The first nine of its eleven tracks are additionally master-blasted by that musical locomotive known as the Count Basie Orchestra.

This question will be on most readers' minds, so let's dispense with it first. Yes, a few tunes seem to sound like Bennett's masterful voice is approaching its twilight, as it strains toward the high notes in "Silver Bells" and quieter moments of "Have Yourself a Merry Little Christmas." But there's really so much more to like. "Santa Claus is Coming to Town" best spotlights the Basie Band, as it blasts through the horn arrangement and solos (even if a moratorium on octogenarians singing a tune with "Santa Claus" in its title seems in order).

Alexander's piano break in "Silver Bells" gives Bennett good reason to "thank Monty for sitting in and playing in a Basie style" (from Bennett's annotations); Alexander simply overflows with industrial-strength Basie, never playing one more note or beat than absolutely necessary to move and groove with blues-based sophistication.

A Swingin' Christmas presents Bennett's first recording of "Christmas Time is Here," the precious Charlie Brown Christmas gem co-written by Vince Guaraldi and Peanuts producer Lee Mendelson. Arranged comfortably in his range, he wanders through its reverie with a contemplative, almost serene performance that somehow sounds profoundly grateful. How could it take him forty years to finally record this song?

Bennett, like so many other great musicians, takes the jazz perspective on "My Favorite Things" with bright and adventurous phrasing, his enthusiasm matched by that dynamic Basie Band sound.

The last two tunes, without the Basie Band, seem to more freely allow the genuine, warm brilliance of Bennett's voice to radiate through. He attacks the first verse but floats through the second of "The Christmas Waltz," drawing out the jazz overtones of the quartet's dancing rhythm in both. "O Christmas Tree," with only pianist Lee Musiker, smolders with quiet and intimate power, ruminating from the profound darkness of that silent night. Bennett seems to find comfort in such timelessness, through a voice that sounds so warm and human yet legendary, too.

I'll Be Home for Christmas; Silver Bells; All I Want for Christmas is You; My Favorite Things; Christmas Time is Here; Winter Wonderland; Have Yourself a Merry Little Christmas; Santa Claus is Coming to Town; I've Got My Love to Keep Me Warm (duet with Antonia Bennett); The Christmas Waltz; O Christmas Tree.