By ANDREY HENKIN
January 16, 2008
Sign in to view read count 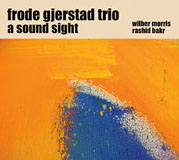 Even for a musician of Frode Gjerstad's stature—he has been active internationally since the early 1980s with a panoply of improvising brethren—New York can still be a tough town. Coming in as part of a short Christmas, 2007 tour, his gig at Jimmy's was unceremoniously cancelled. So he was to be found Dec. 11th packed into the back of Downtown Music Gallery with bassist Øyvind Storesund, drummer Paal Nilssen-Love and guest Steve Swell, playing to a sizeable and appreciative crowd of regulars. The group soldiered on amicably, Nilssen-Love's pyrotechnics limited to a snare, hi-hat and one cymbal and Gjerstad's alto and clarinet as biting and probing as it has been for decades.

ADVERTISEMENT
With Morris and Bakr, perhaps Gjerstad's aesthetic is a little more "American" and the rhythms more stable, but lengthy exploration is still the catchall. The disc is composed of three involved improvisations: "Sound (at over 30 minutes), "Sound Sight," which at four minutes is a slow breather after "Sound"'s fire and "Sight," 27 minutes of rested and restive Gjerstad.

What one takes away from this disc, the concert or indeed his whole career, is that Gjerstad, as any improviser worth his salt should, embraces challenging playing situations with a range of individuals yet is steadfast in remaining himself.