Syrinx Effect: A Sky You Could Strike a Match On

By PATRICK BURNETTE
January 15, 2018
Sign in to view read count 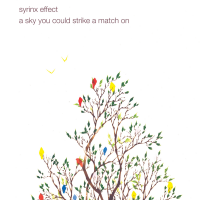 Syrinx Effect is comprised of just two musicians: Naomi Siegel (trombone) and Kate Olson (soprano saxophone); they expand their sound with effect pedals and overdubbing. Eric Eagle, the producer on their new album, A Sky You Could Strike a Match On, plays percussion on several of the tracks.

Syrinx Effect labels itself "interstellar folk punk jazz" but while Siegel and Olson may follow the DIY ethos of punk, they are obviously trained musicians with mastery of their instruments. A Sky You Could Strike a Match On offers a mix of spacy (interstellar?) numbers with more aggressive, beat-box driven songs and the occasional boundary-pushing improv, but focuses on recognizable, hummable melodies. Looping and layering instrumental lines generated by two musicians almost necessitates picking relatively short harmonic cells to repeat, so don't come to the album looking for labyrinthine chord sequences. There are fine improvisational passages on this album, but the narrative devices (stacking simple elements chorus by chorus to create cathedrals of sound) come from the world of pop as often as jazz.

Jazz fans love acoustic music because it focuses on the nuance of individual performers. Sheer talent and personal expressiveness is emphasized, the "production," as such, kept to a minimum. Syrinx Effect has no interest in presenting a "pure" acoustic experience, but don't let that discourage you. A Sky You Could Strike a Match On is a fine album. The compositions (all self-penned) hold interest, the pace is varied, the playing at a high level. When the album shoots at pop euphoria, it actually hits—these aren't dilettantes playing with electronics. Soprano and trombone are pitched far enough apart that textures never get muddy, and as two of the less flexible (expressively speaking) of the jazz wind instruments, they thrive in this more "produced" environment. Most importantly, the album is a fun listen that says its piece in fifty minutes and encourages you to cue up the first track once the last one finishes.

Title: A Sky You Could Strike a Match On | Year Released: 2018 | Record Label: Self Produced