By HRAYR ATTARIAN
September 16, 2015
Sign in to view read count 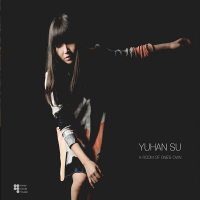 Vibraphonist and composer Yuhan Su's second release as a leader A Room Of One's Own is an intensely impressionistic work that captivates with its creative energy. Compared to her enchanting debut, Flying Alone (Inner Circle, 2012), the current album is more cohesive with the eleven tracks intricately interlinked. If her first was a series of charming poems around a common theme, her sophomore effort is a single, engaging novel in verse.

The suite's ethereal lyricism continues to "No 13 Waltz" and envelopes the song. Su accompanies herself with her mallets as she sings softly an evocative lullaby. Her crystalline strikes resonate against Herbert's and bassist Petros Klampanis' shimmering strings.

Klampanis' lithe mellifluous improvisation enhances the melancholic ambience of "I Do Not Always Understand What You Say What Is, Is By It's Nature On Display II." The contemplative piece features Su's resonant, nocturnesque soliloquy that fades in and out of the spotlight. Drummer Nathan Ellman-Bell enhances the cinematic atmosphere with his rustling brushes, reverberating cymbals and sparse beats. Holman's wistful, angular horn and Herbert's warm, swells of notes underscore the incandescence of the undulating melody.

On this intelligent and emotive record Su demonstrates that she has a mature and singular voice. One marked by ardent romanticism and pensive originality. She also emerges as a sensitive and clever bandleader allowing ample room for her sidemen's individuality while using them to augment her overall musical vision. A Room Of One's Own is delightful and stimulating as well as quite memorable. It is simultaneously edgy, inventive and accessible.