By DAN BILAWSKY
February 3, 2013
Sign in to view read count 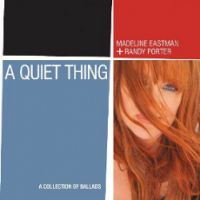 When Bay Area vocalist Madeline Eastman released Bare: A Collection Of Ballads (Mad-Kat, 2001), it was a bit of a departure from her previous recorded work. By that point, she was a decade into a critically acclaimed recording career and she had established herself as an adventurous, risk-taking, creative artist with albums like Point Of Departure (Madkat, 1990), featuring trumpeter Tom Harrell, and Mad About Madeline! (Madkat, 1991), with pianist Cedar Walton, saxophonist Phil Woods and guest vocalist Mark Murphy. Some might have viewed her sudden, quiet-and-introspective turn as something new, but for Eastman, it was actually a return to form; her fondness for ballads predates all of her early releases.

In the brief liner notes for A Quiet Thing, Eastman notes that she once took stock of her repertoire when she started to sing and quickly discovered that "the list was 98% ballads." She branched out beyond this area and built up a diverse repertoire that covers the full spectrum of this music, but she never lost her love of the sensitive, softer side of things. Bare, which paired her up with pianist Tom Garvin, brought her back to this soul searching music and A Quiet Thing is most definitely a sequel.

Garvin, who passed away in 2011, is sadly missed here, but pianist Randy Porter fills his shoes without a problem and sounds fantastic. His balanced approach to the instrument makes him a perfect partner and accompanist for Eastman. He avoids excessive pedaling and the percussive-equals-emotional mentality that many lesser pianists fall prey to when accompanying singers; Porter's subtlety is mirrored in Eastman's delivery, as she avoids overt ornamentation of any kind in favor of lyric recitations. Slight vibrato and sliding pitches can be heard, but no attention is ever drawn to either one; Eastman uses them to serve the song, not herself.

Slow tempos and gentle developments are, obviously, a given across the whole program, but Eastman imbues each tune with different qualities. Optimism in the face of uncertainty is a theme that sneaks into a few numbers and love, whether lost, found or somewhere around, pops into the picture as well. Highlights include "Alfie," "Pick Yourself Up," Randy Newman's Beaches-associated "I Think It's Going To Rain Today," "I Remember" and the brief, album-closing "God Only Knows."

Power in music isn't measured in terms of decibels or athleticism, but through connective abilities. Music that strikes a chord with a listener, making its mark in their ears and soul, is powerful music that matters; A Quiet Thing does just that.

Alfie; Pick Yourself Up; Sea Journey; Spring Can Really Hang You Up; A Face Like Yours; I Remember; The Band And The Beautiful; All Of Us In It; I Never Meant To Hurt You; You Are All I Need; It's A Quiet Thing; I Think It's Going To Rain Today; With One More Look At You.