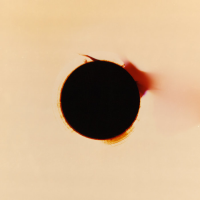 Like the black hole its cover image evokes, Slauson Malone's debut solo album, A Quiet Farwell, 2016—2018 is a beautiful mystery, using disorienting samples and despondent beats to confuse and captivate. Jasper Marsalis—son of jazz legend Wynton Marsalis—rejected formal musical training, instead establishing himself under his pseudonym as a forward-thinking hip-hop producer through his work with New York experimental collective Standing on the Corner. While A Quiet Farwell, 2016— 2018 uses dusty soul samples, warped vocals and lo-fi drums, familiar to fans of Standing on the Corner, Malone pushes these elements into even stranger territory, balancing outbursts of chaotic sampling with easy-going and meditative moments.

"02/26/12, Smile #2" is simultaneously calming and heart-wrenching, in a way that Earl Sweatshirt fans might recognize. Guest rapper Maxo complements Malone's melancholy piano loops with his despondent lyrics and deadpan delivery. Aside from a few false starts using random samples, Malone's production acts as a perfect foundation for Maxo's performance.

Malone contributes his own vocals and lyrics, along with hosting featured artists, giving A Quiet Farwell, 2016—2018 a cohesive voice that conveys a gripping emotional arc across the tracklist. On "THE MESSAGE," he pairs empowering lyrics with a moody, hypnotic instrumental, undercutting the track's uplifting lyrics. This uneasiness is fulfilled later on "THE MESSAGE 2," where he fixates on feelings of helplessness, singing through thick layers of autotune over warbly organs. Malone truly makes this the album's emotional climax, drowning his cries in muddy synths and rumbling bass.

Malone's experimental production often buries vocals, turning verses into another texture seamlessly integrated into his woozy beats. On "11/28/55, Ttrabul," he only allows a few words from rapper Medhane to break through the dreamy blanket of pitched samples, preserving the song's meditative pace.

Malone's fusions of hip-hop beats and sound collage become inspiring when he uses chaos to complement his lyrics. His aggressively chopped pianos, growling bass and fragile organs help "01/01/09, My feet's hurt 'I was a fugitive but then I realized there was nowhere I could run to'" feel just as personal as it is abstract. Malone mumbles about feeling stuck, cursed and distrusted, punctuating these fractured observations with bursts of sampled screams and industrial noise.

Malone has assigned confirmed meanings to some of A Quiet Farwell, 2016—2018's sounds, explaining over Twitter that sirens at the beginning of tracks with dates in their titles mourn victims of racism. Although confirmed meanings and lyrical themes of trauma in the African American experience could be used to decode A Quiet Farwell, 2016—2018, part of the album's beauty comes from how dense and impressionistic it is. Slauson Malone has created one of the unique albums of the decade, one that every music fan should dedicate themselves to digesting and appreciating.