By EDWARD BLANCO
January 11, 2016
Sign in to view read count 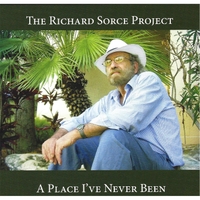 New York-based pianist/Composer and educator Richard Sorce has had a life-long affinity for the Brazilian genre and the music that emanated from the periods of the 50s through the 70s which led the artist to form the Latin Jazz group, The Richard Sorce Project in 2012. Sorce and the group now present their ten-track Brazilian- styled Latin jazz album A Place I've Never Been full of light smooth- tinged rhythms and percussions reflecting the leader's preference for the music that has influenced his career. The band performs in various formats but for this recording, Sorce draws on a five-piece rhythm section augmented by a three-piece horn section of trumpet, saxophone and trombone and the results, some of the finest rich Brazilian-flavored sounds on tap anywhere.

The gorgeous title-track opens the music with the pianist on the keys and Mark Friedman floating the flute in the background before the percussive beats of drummer Bobby Deitch 99 kicks in joined by bass lines from Barry Wiesenfeld as the group goes where they've never been. The almost funky/Salas introduction to "Where You Are" hides the coming shoulder- moving samba-styled nature of the tune. One of the stand out pieces of the recording has to be the moving "Sempre Em Meu Coracao" featuring the horn section of trombonist Bob Ferrel, trumpeter Vinnie Cutro and a marvelous solo by saxophonist Friedman.

Offering a bit of the soft and warm side, Sorce's composition "Quiet Moment" is one tender tune featuring a humble trumpet at the center with splashing percussions in support and accompaniment by the flute to top it off. The sounds of Brazil continue to gyrate on such terrific tracks like "Until Forever," "For Me and You" and the sizzling Samba finale of "Summer Samba." Pianist Richard Sorce and band lead one on a magical journey of exotic Brazil to A Place I've Never Been delivering exciting Latin rhythms and beats of fresh new music in a compelling and highly entertaining musical statement, well done!

A Place I've Never Been; Where You Are; One More Lifetime; Sempre Em Meu Coracao; Quiet Moment; Celebracao; When I'm With You; Until Forever; For Me and You; Summer Samba.