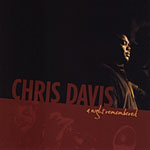 The air is charged, not the least because the trumpet player displays remarkable chops. Add to that the fact that his band is right there with him—the saxophonist, trombonist, pianist, bassist and drummer. This is not just any live recording; it is the debut of the fine Florida-born-Vancouver-based trumpeter, Chris Davis on A Night Remembered. Once again, the excitement on the set is palpable, from the time that the first legato notes are plucked by bassist Tommy Babin, while pianist Tilden Webb smacks the odd-time chords in harmony. There can be no mistaking the genealogy from Fats Navarro and Clifford Brown to Chris Davis.

Davis' sound is fat and warm no matter what register he is playing in and he displays a dazzling virtuosity as he traverses the range of his horn. This is in ample evidence on "Elevation," on which Davis carries his horn, playing to dizzying heights. He is also spectacularly inventive on "Thru Traffic," but it is on Duke Ellington's "Happy-Go-Lucky Local" that the trumpeter displays the full array of his powers. His sense of harmony is highly developed, enabling him to make bold harmonic statements through complex chord progressions. The blues structure of the arrangement also permits Davis to ring the changes and embody the algebraic terms of the inherent bebop harmony. On Benny Golson's "Gypsy Jingle Jangle," he is bright and sparkling, and again on Wayne Shorter's "Infant Eyes" he shows the depth of his emotional expression.

The band that Davis has gathered for this debut record does not just warm to his leadership; they smolder like burning coal. Babin is magnificent throughout and gives early indication of his superb pizzicato style on "Happy-Go-Lucky Local." Drummer John Davis gives lie to the fact that the drums cannot sing on "Infant Eyes." Trombonist John van Dewsen tears up the choruses on the same track, in addition to "Elevation" and "Infant Eyes." Saxophonist Mike Allen has mastered both alto and tenor saxophones—no mean achievement as the instruments are almost polar opposites—as far apart in intonation as the voices of two separate genders can be. And Webb must be the most sensitive keyboard artist on the Canadian West Coast.

In the end, there is much excitement here. What will Chris Davis do next? With talent like this the possibilities appear symphonic.