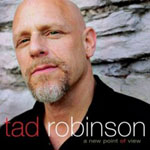 Contemporary soul/blues takes a ride on this studio session by singer Tad Robinson. He's been noticed lately through his work in the motion picture industry. His song, "Hold Tight, appears on the soundtrack to the motion picture The Guardian, which stars Kevin Costner, and he appears in the film Under Siege, starring Steven Seagal. On his web site, Robinson describes his role as "a terrorist-disguised-as-a-blues-singer, performing songs that we wrote for the production.

A New Point of View mixes vintage R&B, soul and pop melodies with contemporary blues. He plays harp on a few selections and swings with a comfortable blues appeal on occasion. But most of the album points to lyrics and melodies with a backbeat, giving his audience a party-time atmosphere with little else. They're the kind of songs that you just want to sit back and relax to without really paying attention. Robinson wants to make sure that everyone goes away happy.

Among the selections on A New Point of View that stand out for their loose blues feel are "Up and Down World and "Broken-Hearted Man. While Robinson does not always convince with authority, he picks his opportunities carefully: songs that work better than others with plenty of room for emotional involvement. With "He's Movin' In (to Her Life) the singer takes on the burden of one who's been there and can't get over it as easy as some folks do. Feel the heartache.

With "Broken-Hearted Man, the album's high point, he wails and moans in the role of blues singer gone mad. Here, his tight horn section and his guitarist lend a hand in making things turn out convincingly. With "More Good than Bad, on the other hand, he turns it over to guitarist Alex Schultz and organist Kevin Anker to put some real emphasis into his work. Later, with "Love is Everything, Robinson resorts to country soul to get his point across. It's a mixed album where the leader plays the role of soul singer, blues singer and entertainer, all under one umbrella.