A New Look at the Blues

By CHRIS MOSEY
December 29, 2014
Sign in to view read count
A release of remastered albums on vinyl by the European jazz label Storyville provides a welcome chance to re-evaluate the blues and the black artists who introduced the musical form to Europe.

The albums are pressed on 180 gram virgin vinyl, individually numbered, and with old and new liner notes. Each record comes with the possibility of a free digital download.

This means many of these discs probably won't be played at all, just put aside in pristine condition for a rainy day. People who buy in such a spirit will miss out on an intriguing slice of musical history. 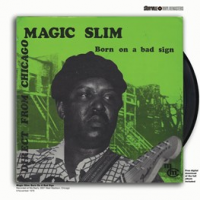 This album was recorded at Ma Bea's blues club on the West Side of Chicago by French blues enthusiast Marcelle Chailleux Morgantini. It is generally considered to be Magic Slim's best record.

Morgantini said of Slim, real name Morris Holt: "He sings and plays his guitar as easy as a stream that flows down a mountainside. It gives you the feeling that his whole life is wrapped up in his music and there is no living without it."

She recorded him for her label, MCM (her initials) in 1976. Storyville bought the rights to the MCM catalogue in the 1980s.

Accompanied by his brothers Nick Holt (bass) and Douglas Holt (drums), and with Alabama Junior Pettis helping out on guitar, Slim kicks off with the classic St. Louis Jimmy 12-bar, "Going Down Slow."

It is one of the most eloquent songs in the blues canon: I have had my fun, if I don't get well no more. My health is failing me, and I'm goin' down slow.

Most listeners take it to be a man's song but St. Louis Jimmy (real name James Oden) said it was inspired by a girl who was pregnant and trying to lose her child: "She looked like she was going down slow," he told English blues historian Paul Oliver (Conversations With The Blues, Cambridge University Press, 1965).

Slim was less than honest with Morgantini about authorship of some of his other numbers. He claimed to have written the moody, magnificent "Born On A Bad Sign," actually penned for Albert King, as "Born Under A Bad Sign," by William Bell and Booker T. Jones, of Booker T. And The MGs.

But Slim got his comeuppance with "Buddy Buddy Friend." British blues band Dr. Feelgood took his song (if indeed it really was his) and—quite literally—made it their own.

Slim and his backing band—later to be known as The Teardrops—bow out with a rocking version of B. B. King's up tempo sexual stomp, "Rock Me Baby."

It is to be hoped that Storyville may now be prompted to dust off the other MCM gems in their vaults, most notably albums by The Aces and Jimmy Dawkins. 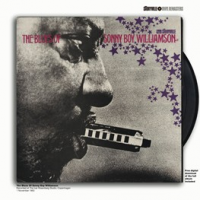 Sonny Boy Williamson No. 2 later moved to Chicago before finding his way to Europe where, in 1963, he recorded this album in Copenhagen with a band that included Memphis Slim on piano and Matt Murphy (guitar).

In The Story Of The Blues (Penguin 1972), Paul Oliver describes Williamson as "unquestionably one of the finest and most influential harmonica players."

This may be so. The problem one has today is his fondness for boasting in his songs of his sexual exploits. In "Once Upon A Time," one of the numbers featured here, he brags of an alleged relationship with an 11-year-old girl.

He says her parents agreed to it and that he insisted she continue in school. A man described as an "elderly roué" in the blinkered 1950s would be seen as a pediofile in the more honest present.

"Why Are You Crying?" is based on a familiar blues theme, the author done wrong by his woman. Then in "Girl Friends," he ups the machismo, claiming to have been done wrong by seven of them at the same time. On "Same Girl" he and Memphis Slim sing of sharing a girl.

However, not all Williamson's songs were lewd. Included here are two numbers about his experiences in Europe. He plays excellent harmonica on "Movin' Down The River Rhine," while on "I'm So Glad I Made It Over Here In Time," Memphis Slim's boogie piano is given pride of place. "Chicago Bounce," an instrumental penned by Slim, also provides relief from all the macho braggadocio.

Finally, in "On My Way Back Home" Williamson bids a tearful farewell to Europe ("I got to go, peoples, but it's going to break my heart").

He returned to Helena, Arkansas and got back his old job playing and singing on the King Biscuits Show. He was still doing that when he died in 1965. 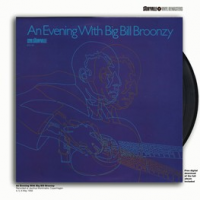 Broonzy was one of the first black bluesmen to arrive in Europe. He was a wily businessman and, once he got established, tried to corner the market. In conversations with jazz writers, he verbally killed off a good many old blues players who were actually in perfectly good health.

Broonzy would shake his head sadly. "Yeah," he told one of those writers, Charles Fox (who also wrote the original liner notes for this album), "Sure was a shame about Sleepy John Estes—he done passed away." Sleepy John was most indignant when he woke up to Big Bill's ploy.

These tracks, recorded at Copenhagen's Montmartre Jazz Club in May 1956, feature Broonzy at his most persuasive. He mixes blues with folk and even pop, his opener the old Billy Hill hit, "Glory Of Love." Hill was also responsible for such gems as "The Chapel In The Moonlight" and "Empty Saddles In The Old Corral."

Broonzy—most likely with an eye to widening his appeal—also sings the old Tennessee Ernie Ford hit "Sixteen Tons." With what Alan Lomax called "that rooster crow" in his deep, dark, Southern voice, he could mesmerize his audience and get away with things that would floor lesser men.

Fox called him "one of the greatest singers in the history of the blues" and it's hard to disagree, though—at this distance—some of Broonzy's repartee falls a bit flat and you find yourself wishing he'd shut up and just get on with it.

Still, let's not carp. In his own very special way, Broonzy captures the essence not only of the blues but of an era, pre-Beatles, pre-Clapton, when men were men and wore duffle coats and sat on the floor at Ken Colyer's to prove it.

The Blues Of Sonny Boy Williamson

Tracks: Why Are You Crying; Girl Friends; Movin' Down The River Rhine; I'm So Glad I Made It Over Here In Time; Chicago Bounce; Movin' Out; Once Upon A Time; When The Lights Went Out; Same Girl; On My Way Back Home.

An Evening With Big Bill Broonzy

Tracks: Glory Of Love; Careless Love; I Gets The Blues When It Rains; My Name Is William Lee Conley Broonzy; Take This Hammer; See See Rider; Diggin' My Potatoes; Midnight Special; Keep Your Hands Off Her; I Got A Girl; You Better Mind; I Love You So Much; Sixteen Tons.