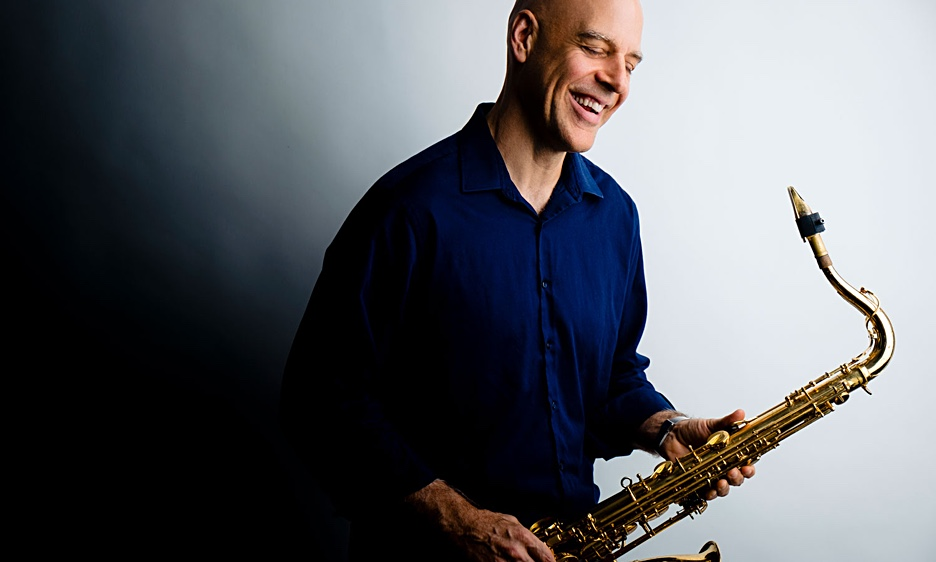 By ROB ROSENBLUM
January 27, 2019
Sign in to view read count

We are not a cover band. Over the years I've appreciated the opportunity to write for the band. Not everyone gets the chance to get their music performed on a regular basis. I have written about 70 charts... —Robert Lewis

He is the director of jazz studies at the College of Charleston, a full time (and long time) member of the Charleston Jazz Orchestra (CJO) in Charleston, South Carolina, in great demand for private lessons by aspiring jazz musicians and, when the time is right, a performer who leads his own group. So obviously, what Robert Lewis needed was another job.

While he is known primarily by local musicians and avid fans as the somewhat reticent, soft spoken multi reedman, that's about to change. The balding 47 year old Lewis, who is a hidden treasure and a powerhouse tenor player, has decided to fill in some of his free time by accepting the baton surrendered by current CJO leader/trumpeter Charlton Singleton.

Those who have heard the orchestra in the past have grown accustomed to the extroverted trumpet player joking with the audience, telling folksy tales of his life in music, breaking into song and even hoofing a bit for an extra dash of entertainment. In the process, Singleton has not only become the best known jazz musician in Charleston, but has been almost an icon for the music in the Holy City. Under his leadership, attendance for CJO concerts grew from a few hundred to thousands. A lot of people attribute that growth to Singleton's ebullient and winning personality.

Now that Singleton has formed a successful band called Ranky Tanky, which incorporates the sounds of the Gullah tradition with jazz and now has a group with national and international ambitions, he has decided to give up the throne. There was no way that he could continue to honor his commitment to the big band and follow his dream of bringing his own personal musical story outside his local community.

According to Lewis, the transition will be anything but disruptive.

"As (Singleton) has become increasingly busy with Ranky Tanky, I've been running rehearsals," Lewis told me in a recent phone interview. "I have actually been the de facto assistant director for quite a long time now."

While changes in the presentation of the CJO will be gradual, Lewis is not without ambition.

"On the micro level, I bring different strengths. There is no way there won't be any change," Lewis confided. "But essentially we will just come up with the best product and perform the best we can. We will get better and better incrementally."

One of Lewis' more ambitious goals is to raise the visibility of the aggregation. "We want to have a few more opportunities to get the band out of town. Maybe doing a recording," Lewis said.

The presentation will be viscerally different. "One of Charlton's great strengths is that he is entertaining. I will be a little more low key. A different vibe, but a good vibe. He would tell personal stories, whereas I am more likely to talk about the specifics of the music."

Lewis is also adding two players to the band. Kevin Patton is an exciting young tenor player, who studied with Lewis. Baritone saxophonist John Cobb, who had given up his seat in the band a couple of years ago, is ready to return.

Most people are only familiar with the finished product and see the director as someone who basically keeps time for the orchestra. But there is a lot more that goes on behind the scenes that is actually more important than the visual.

"The basic job is to plan out the shows, organize the band, conduct the band in rehearsals and in the concert," explains Lewis. "I'm involved with choosing what the shows are, but there is a committee that plans out what the season is going to be. I also have a lot of input in determining guest artists, and themes. I will also decide what new arrangements will be written and who will be assigned to them."

His first big project is the February 23rd concert planned for internationally acclaimed vocalist Diane Schuur. "She had a lot of stuff written over the years for small groups. We decided to take some of those and fill them out for the whole band. A big part of the CJO is that we do a lot of our own writing. The concerts always have something no one has ever heard. We like to generate our own material. We are not a cover band. Over the years I've appreciated the opportunity to write for the band. Not everyone gets the chance to get their music performed on a regular basis. I have written about 70 charts for the band."

Under Singleton's baton, Lewis had at least one song in which he was featured. I asked him if this new role would curtail is own playing opportunities.

"I will continue to play solos with the band,'he insisted. "It's a balancing act for sure. Every time I take a solo, someone else isn't getting one. I assign all solos, so I will have to keep in mind different players' strengths. I want to make sure everyone gets a chance to play. You want to put everyone in the best light. For example, some players are better at ballads and you write an arrangement for them, with that in mind. It is important to be thoughtful about it."

Lewis is a very experienced and knowledgeable jazz musician, whose personal tastes includes some of the more esoteric and challenging jazz performances of people like John Coltrane, Dave Liebman, Joe Lovano and Chris Potter among others, but he is fully conscious of the importance of reaching out to a much wider audience, whose exposure to jazz may be limited.

"Our music has to be open and inclusive -there are some approaches to jazz that can be really directed at the aficionados. Sometimes, that can push away a more general audience but it doesn't have to," Lewis insisted. "I've seen musicians play for an audience that didn't know the technical aspects, but appreciated the emotions expressed in a piece. We don't dumb anything down—we can still connect with people. When you hear (tenor saxophonist) Chris Potter, the main thing you hear is excitement. If you are open about what is going on and explain it to the audience, you can bring anyone to it. "

But, like the CJO orchestra, Lewis' immediate ambition is simple and sound. "We want to put on a good show. And that means picking good material and making a connection with the audience. If you invite people in with your music, a lot will stay."