By GLENN ASTARITA
February 9, 2014
Sign in to view read count 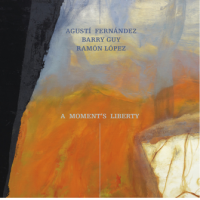 The powerhouse international trio's third effort radiates an uncanny, or perhaps uncommon framework combining beauty—due to Agusti Fernandez's lyrically rich and gorgeous statements—coupled with power and free-form elaborations. For instance, on the 18-minute opener "A Moment's Liberty," Fernandez opens with solitary phrasings via lush balladry while transmitting a sense of loneliness until the band embarks on a topsy-turvy voyage, drenched with slippery deviations and drummer Ramon Lopez's rolling wave type patterns.

Aided by the translucent audio engineering, you could probably hear a pin drop during the quieter passages, but even when the band is going for the gusto with scorching interchanges, they perform with eloquence and panache. Within the grand scope, distinguished bassist Barry Guy is the director of operations amid blustery and poignant lines that also infuse a lofty degree of counterpoint into the big picture. As the trio intermittently launches a cavalcade of rhythmic outbursts, which is a show of force, yet frequently tempered by Fernandez's tuneful trinkets and melodious soundscapes that often equalize the oscillating currents. They improvise and flourish among tangible themes but occasionally deform the storylines into occurrences of avant-garde expressionism.

On "Uma," the pianist constructs swirling and expansive narratives that spawn quite a bit of depth, framed by rests between choruses and his lithe interludes. Consequently, each track is a nest of unanticipated surprises pertaining to meter and shifts in strategy. And Fernandez finales the agenda on the ever-so-gentle "Joan I Joana," where the tide shifts to a serene environ. Here, Lopez' brittle brushes reinforce the fragile outlook, but the musicians broaden and intensify the overall scope, while ultimately ending on a somber note.

Historically speaking, it is somewhat out of the ordinary for jazz-centric improvisers, to fuse sonatas and hummable themes with a red zone schematic. Then again, these musicians are accustomed to venturing off the beaten paths and dishing out works that sustain interest and yield alternating perspectives in an immensely entertaining manner.