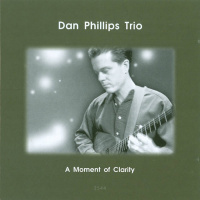 Dan Phillips has led bands in Boston, New York, Bangkok and Tokyo, where he lived and taught, and in Chicago, from whence this band springs. The first impact Phillips makes is with his sense of swing and the thick notes that fall from his guitar. Having done so, he opens the vista in a swell of notes that cut, roll and sweep ahead in a near torrent. He is met along the trail by Krzysztof Fabian, whose bass rummages through the offbeat, and Tim Mulvenna, whose crisp rhythm at the outset now punctures time and edges the progression onward.

Phillips likes to set up a groove. He can write a melody that jumps and skips, as "Crosswalk" does before it breaks into free form. The textures weave and bob, taking flight on the wings of their imagination. A soft shade, pastel colours in slow whirl, brings in "Same Moon Different Place" as Phillips leaves wide spaces filled at first by arco and then by percussion. And as the guitar seeks and finds its pensive path, its journey is illuminated by the austere plucking of Fabian and the fragile brushwork of Mulvenna. On the main tune, Phillips sets up a cycle that is countenanced by the bowing of Fabian. The mood they set up unravels itself in new age atmospherics, gentle and pretty, but not without emotion, which is the crux of any song.

Phillips may chart his course at the outset, but he makes the experience interesting by taking a turn, breaking up the rhythm, and scattering the edifice. In the unknown lies welcome surprise.