Isaiah B. Brunt: A Moment In Time 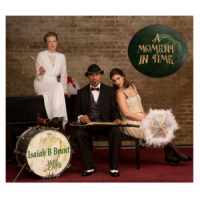 The road has been a long one for journeyman Isaiah B. Brunt, a triple threat songwriter, guitarist, and vocalist, who has his own brand of blues. Brunt was born in New Zealand, paid his dues in Australia, and found common ground in New Orleans. After extensive studio work Down Under, which resulted in an EP in 2011, he self- produced "Nursery Rhyme Blues in 2013. Then it was off to New Orleans in 2015 to record "Just the Way It Goes," culminating with A Moment In Time, also done in the Crescent City.

From the opening piano riff of "Still Waiting," the music has the characteristic sound of The Big Easy, highlighted by keyboardist Mike Lemmler, and secured by iconic bassist George Porter Jr. Brunt has a natural laid back vocal style that rests smoothly in the groove; and his guitar, specifically lap steel, playing is polished and discerning. The distinct regional syncopation, which comes easy to the locals, shines on "Singing The Blues," accented by a solid horn arrangement courtesy of sax man Jeffrey T. Watkins, of James Brown fame. The good times keep rolling with "Lost Jacket Blues," where the horns again deliver the maximum rhythm and blues effect. Brunt's lyrics are both entertaining and contemporary, and conveyed like a man who's been around.

The repetitious boogie guitar lick defines "That Place On The Road," conjuring images of juke joints and roadhouses on steamy Saturday nights; and "Same Old Road," relies on Lemmler's solid organ phrasing. Both pay tribute to the inevitable wandering a musician has to encounter, which has become an essential source of the music. There is the up-tempo romantic possibility in "May I Dance With You," and the jukebox seasoned "Party All Night," where Watkins again displays formidable tenor blasts.

"Travel Back In Time," is the perfect title for this swaying number, featuring archetypal clarinet work by James Evans, exuding vintage Vieux Carré all the way. Continuing with a mellow background, Brunt is joined by vocalist Sarah Burke on "A Moment In Time," and her participation here, as other numbers, enhances the ambience. The mood transcends into a breezy affair, an apropos closing number, floating amidst Ian Smith's sophisticated flugelhorn.

New Orleans has its own vibe, a city with immense musical credentials and history. The fact that Isaiah B Brunt has dug in there and recorded two records takes a lot of confidence and talent. He came prepared with a stimulating blend of blues, funk and soul; performed with passion and panache, yielding an intriguing production.

Still Waiting; Singing The Blues; That Place On The Road; Lost Jacket Blues; May I Dance With You; Travel Back In Time; Party Late All Night; Same Old Road; A Moment In Time.

About Isaiah B. Brunt