Samuel Blaser Consort in Motion: A Mirror to Machaut

By GLENN ASTARITA
September 27, 2013
Sign in to view read count 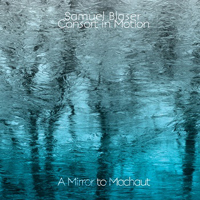 Blaser tackles the work and ideologies of pioneering medieval composer Guillaume de Machaut for a program that proffers diversity and unforeseen shifts in strategy. His conservatory training, linked with his broad improvisational faculties result in a heady paradigm shift. Perhaps there are a few ways of tackling the artist's conceptual premise, whether you intake the music as cutting-edge progressive jazz or try and decode Machaut's medieval musical architectures within the jazz idiom. Either way, the results are gratifying.

At times hectic with stilting, probing or bending horns choruses it is interesting how Blaser also transforms Machaut's work into breezy jazz opuses and subtle melodic content, sometimes augmented with a bluesy swagger. But the leader doesn't play by one predetermined rule of thumb. For example, he arranges Machaut's "Dame, se vous mestes lointenne" into a semi-free jazz vibe, propelled by drummer Gerry Hemingway's rumbling intro leading to a stately odd-metered horns vamp, spiked with a tuneful hook that bridges classical and jazz. Riding above an asymmetrical groove, Hemingway goes on a tear, as the band notches it up for a garrulous finale. But the tide turns via pianist Russ Lossing's brooding phraseology on "Cantus Planus." However, Blaser divulges gobs of texture into the grand schema, largely noticeable on the capacious "Linea," where genial and quietly melodic horns are peppered by the rhythm section's brisk undercurrent, amped by Lossing's free-flight breakout. And on "Introit," the trombonist dishes out a blues-tinged solo atop a moody and darkly hued thematic buildup that morphs into a buoyant unison foray between Lossing and bassist Drew Gress, followed by Blaser and saxophonist Joachim Badenhorst's spiraling mode of attack.

Blaser triumphantly channels Machaut's groundbreaking Westernization of baroque music into an outside jazz perspective. In most cases, it is necessary to execute a seamless or transparent alignment of two disparate musical genres into a cohesive whole in order to achieve some degree of success. Accordingly, Blaser's fluid artistic visions and convictions are transmitted in such a way that would conceivably garner the attention of an extensive audience as he deconstructs borders by merging antiquity with a thoroughly hip panorama.