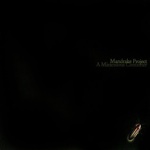 If the trick to creating an unique musical identity is to grab from your influences without dissipating into hollow gesture, then Mandrake Project has created a singular musical personality on A Miraculous Container. Featuring an array of guest musicians, Mandrake Project's six full-time members provide a wealth of instrumental ability and vision, not to mention a talent at expressing wide ranging musical vernaculars. Often described as cinematic or progressive, Mandrake Project's style is not limited to any one genre but creates tunes that feel both vibrant and familiar. It's a delicate balancing act, but it makes this album truly rewarding.

For all those who grew up in the pre-digital age, the vinyl hiss of "A Favor Returned" that kicks off the album is a welcome sonic memory which serves as an indication of the orchestrated soundscape that will follow. This is reinforced with the Robert Frippertronic loops and guitar riffs that crescendo into the opening of the title track. Guest John Schisler aptly handles the moving vocals in "A Miraculous Container"—a melancholic ensemble piece that wanders between artful string arrangements and rock instrumentation. It also switches up time signatures to exploit the verse-chorus differentiation using rhythmic qualities to express musical ideas as much as it uses melodic content.

This instrumentation and cadence interplay is used on numerous tracks, such as "Auquarelle" with its exchange between strings, saxophone and guitar statements, and on "And Five Makes Twenty," with guitar riffs supplanting synthesized ambient grooves. The band avoids staleness by mixing a wealth of instruments and sound samples, and by using tight melodic breaks which keep the attack fresh and interesting.

Another striking feature of this album is how dedicated the musicians are to contributing to the whole as opposed to spotlight moments. There are ample spaces where guitarists Kirk Salopek and Ryan Meals could have unleashed a flurry of solos, but instead a nuanced chord voicing or a complimentary riff emerges and pushes the song along without overwhelming it. This is also evidenced in using Rick Nelson's strings as a coequal fronting instrument. Beautifully executed, Nelson's violin, viola, and cello add a whole other dimension to tracks like "Quintet Harmonique" and "La Luna." The rhythm section of David Chapman Jamison and Benjamin Zerbe deserves special mention for keeping the band's more ethereal songs grounded in earthy, grooving rhythms. Also of note is the beauty of the production itself. From the high quality tone of individual instrument to the overall mix, this is an extremely well-produced album.

There is so much happening sonically on A Miraculous Container that the music can either be endlessly intriguing or wash over like a solid wave. But either way, Mandrake Project has created a vibrant musical universe that, while informed by multiple genres and idioms, is an exceptional musical amalgam, and, most importantly, a unique listening experience.