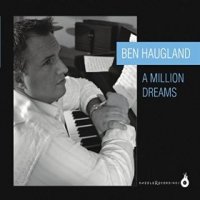 During the course of A Million Dreams, pianist Ben Haugland's second date as a leader, most of the trappings of a typical mainstream jazz record are present and easy to identify. Not unlike a lot of young leaders who are fusing their own creative aspirations with an allegiance to the tradition, Haugland penned four of the disc's eight tracks, and chose three American Standards and a Charlie Parker tune to round out the program. Another recognizable element is the presence of a propulsive, flexible, sensitive rhythm section comprised of Haugland, bassist Jay Anderson and drummer Chris Smith. Haugland, tenor saxophonist Stephen Jones, and trumpeter Scott Wendholt are capable soloists with stimulating things to say, excellent organizational skills, and ample technique.

While all of these things are significant in themselves, the factors that make A Million Dreams qualitatively different than a slew other recent recordings with a similar conception and instrumentation aren't quite as easy to delineate. A careless listener might contend that the disc is, stylistically and spiritually, just another knockoff of any number of Blue Note, Prestige, or perhaps, Contemporary sides from the 50s or 60s. However, a hasty, facile verdict doesn't come close to telling the whole tale. Though the disc can be listened to casually and enjoyed as such, only repeat visits, close attention, and a willingness to focus on the work from different perspectives reveals the full extent of the band's virtues, as well as delivering some very large rewards.

The overall sound of Haugland's group surpasses the individual contributions. These guys play the leader's genuinely original compositions—and the rest of the material—with absolute conviction, as well as a great deal of skill and precision. No one sounds anxious to rush through the heads in order to seize an opportunity to blow. For example, the band navigates the twists and turns of Haugland's lively, extended "When Day Met Night," with élan. In lesser hands the composition might not sound nearly as convincing. The same can be said for his lovely, pensive "Dreamscape," in which the group underscores the composition's lyrical quality, and delivers just the right degree of assertiveness.

Haugland, Anderson, and Smith find a number of ways to spur the band while sharing the same sonic space. The pianist's bright, poetic comping during the heads and amidst the soloists is rhythmically incisive as well as utterly sympathetic to each of the songs. He brings so much to the table without overstepping boundaries or clashing with his cohort. For instance, the chords and single notes during Jones' melody statement and the solos on "Here's That Rainy Day" add another dimension to the track, while often ringing out joyously like bells.

Anderson and Smith are a prime example of a bass and drums team who function effectively and add spice to a largely straight-ahead context. Regardless of the tempo, rhythmic feel, and their willingness to shake things up in the spur of the moment, the center always holds and the music maintains an unwavering certainty. Check out Anderson's firm placement of the beat and the inspired note choices of his walking line on Jones' first two choruses of "Big Foot." Or, his ingenious, utterly assured broken line throughout "Dreamscape."

Smith is ready to take his place in the crowded, intensely competitive field of New York City trapsters. On up tempo tracks such as "When Day Met Night" he often plays straight, relatively unadorned time for long stretches before executing stealth buzz strokes, or leaves the ride cymbal to play expertly timed phrases of different lengths on various combinations of drums. The head of "Big Foot" exemplifies Smith's ability to tailor a number of snare drum strokes to key points of Charlie Parker's composition. He seasons the conclusion of "Dreamscape" with a few soft, spread out, rolls to the tom toms and the snare drum with the snares off. Generally speaking, regardless of how busy or inventive he gets, Smith is never assertive to a fault and, in conjunction with Anderson, the pulse always remains firm and true.

Haugland is a mature, substantive improviser who, on a track-by-track basis, offers ample helpings of different aspects of his artistry. He always gives the impression that his mindset and creative impulses encompass the song and the goings on of the bass and drums. The pianist's turn on "Dreamscape" germinates from the head, carefully filling in Anderson's and Smith's nuanced, barebones accompaniment, and evincing a patient, balanced vibe even as the lines become more fleet and complex. "Second Sight" constitutes one long, thrill ride, in part because of his firm, incisive touch. Exhibiting fervor and calculation in equal measure, Haugland pits punchy, unrelenting, Tyner-like chords against hard, biting single note lines and, uncharacteristically, grabs ahold of the bass and drums and yanks them into his orbit. He achieves a purity of expression while playing less than a couple of dozen notes in the first eight bars of a haunting and deeply satisfying "A Weaver Of Dreams" solo. Each note is carefully paced and bears a precise amount of weight in relation to the middling tempo swing of Anderson and Smith.

Apart from their invaluable contributions to Haugland's compositions and arrangements, Jones' and Wendholt's solos are another essential component of the recording. Haugland lays out for the first two choruses of Jones' turn on "When Day Met Night," making it easy to savor the tenor man's medium weight tone, and the manner in which his phrases playfully dart in and around Anderson's and Smith's firm foundation. Taken in its entirety, the solo entails the accumulation of telling details, a persistence that never sounds hectic or unwieldy, and the occasional sustained note that serves as a soulful transition between ideas. Wendholt's single chorus on "A Weaver Of Dreams" begins on an even keel. His rounded tone and smart, melodically rich phrases gradually, almost imperceptibly, build momentum before he unleashes weighty, bravado phrases in the last eight bars.

When Day Met Night; Birds Of A Feather; Here's That Rainy Day; Dreamscape; Second Sight; A Weaver Of Dreams; Dedicated To You; Big Foot.