Dennis Gonzalez: A Matter Of Blood

By MARK CORROTO
September 3, 2009
Sign in to view read count 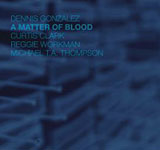 The reemergence of trumpeter Dennis Gonzalez continues. But, to quote an infamous rapper, "Don't call it a comeback, I've been here for years." And Gonzalez has been making music for many years. Since he has lived the last three decades in Texas, the New York-centric jazz world tended to overlook him. With a flurry of activity of late, it is nearly impossible to ignore him.

His stateside music has been tended to by North Carolina's furthermore Recordings. A Matter Of Blood follows the jazz burner Renegade Spirits (2008). As with all Gonzalez projects the music is presented as brash improvisation, but has a firm commitment to melody and composition. His quartet contains Coltrane bassist Reggie Workman, the US-born, Amsterdam-based pianist Curtis Clark, and the under-appreciated drummer Michael T. A. Thompson.

Calling this disc introspective might be a disservice to the players. While the music is paced and reserved, it is still quite demonstrative and effusive. Credit here is to Thompson's drumming, a constant dynamic of motion. On "Anthem For The Moment" the rumbling of Thompson threatens to blow the track apart, but the remaining three stick to an uncomplaining resolve for the melody, an attribute saved for Albert Ayler's music. Workman, an even-tempered time keeper, levels the mood throughout. His opening on "Arbyrd Lumenal" is an invocation to the band to raise their thoughts to heavenly ones. The Gonzalez composition slowly reveals itself in the nearly 14-minute track, Workman's bass seemingly talking or singing to listeners. The band builds a freight-train's worth or momentum by the conclusion.

The simple and short tracks described as "Interlude: 30 December," and "Interlude: Fuzzy's Adventure" allow for Clark and Thompson respectively to make solo statements before the cataclysmic finale, a powerhouse of energy meets ferocity.