Jaki Byard: A Matter of Black and White 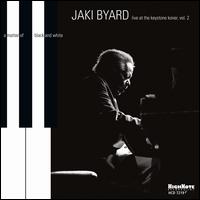 Curious title for this album. Sure, it's a nice pun on the pianistic adventures included, but with the possible exception of Duke Ellington or Mary Lou Williams, there was hardly another jazz pianist of the mid-20th Century who saw more gray areas in the music's broad landscape than the late Jaki Byard. In his trio sessions for Prestige, his work with Charles Mingus, or in his late-period solo recitals, anything from James P. Johnson's charging stride figures to Earl Hines' unbridled, multi-octave runs to the dissonant colorations of Andrew Hill are likely to be encountered. Here, and everywhere else he played, jazz was not an either/or proposition, with clear demarcations. As William Faulkner once wrote, "The past is never dead. It's not even past."

Culled from a series of live dates at San Francisco's Keystone Korner in the late 1970s, A Matter of Black and White (the second released so far) finds Byard long since settled into his chameleonic style. Unlike either Ellington or Williams, he was not particularly concerned with composition, other than in the improvisatory sense. So as usual, Byard delivers a hodgepodge selection of standards and tributes, with the occasional original thrown in for good measure. But the meat of the program lies in the way he incorporates wildly disparate styles into their unfolding, all the while retaining an identifiably personal voice.

A perfect example of this technique is Irving Berlin's "Alexander's Ragtime Band." If the original is a rather uninspiring, early century pop song, here it becomes a conduit for increasingly complex rhythmic and harmonic reinvention. Byard opens with an ivory-tickling, stride-marching run through the main melody, and then drifts into more exploratory, abstracted territory with each subsequent chorus, until by the end huge arpeggiated waves drown his offbeat, left-handed bass lines with cliffhanging pyrotechnics. Petula Clark's "I Know A Place" picks up a hard-driving boogie- woogie tinge, and the usually maudlin "Hello Young Lovers" develops from a lush, sweeping opening cadenza into an entire wall of staccato, octave-leaping, up-tempo runs. Both the Billie Holiday medley near the beginning of the set, and the Ellington medley that closes it, make the case for the pianist being the closest thing jazz ever had to a living, breathing Smithsonian: a repository for American musical heritage, sluiced through the music's here-and-now imperative. The first is elegant, the latter expansive.

In recent years, Byard has reached many listeners in a very indirect way: through his work as a teacher and mentor, most notably to pianist Jason Moran. As for Byard himself, this means that he has become a central precursor to many of the conglomerated trends that have so far defined jazz's second century. This set, on the tail end of several decades of fearless exploration, may not be his most engrossing work (Mingus' 1964 tour of Europe is) or his most educative (teaching in some of America's greatest music departments). It is, however, a fine place to sample some of what makes him such a unique talent.