Tesla Manaf: A Man’s Relationship with His Fragile Area 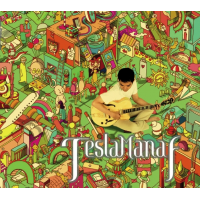 Unlikely settings can spawn the most interesting results as heard in Indonesian based guitarist Tesla Manaf's A Man's Relationship with His Fragile Area which is one of the most intriguing titles for an album in recent years. The music is equally fascinating—the instrumental persuasions of Manaf's homeland and the slightest hints of his early music inspiration Pat Metheny. Yet this debut on Moon June Records is clearly not your typical mainstream jazz or progressive-rock guitar album. Manaf's been concocting his own brew by interpreting new ways to approach classical music, jazz and indigenous music.

The opening track will attest to this peculiarity as Manaf's guitar soloing in unison with rapidly spoken words from a native Indonesian speaker; a language to instrument translation reminiscent of Jason Moran's "Ringing My Phone (Straight Outta Istanbul)" where the pianist's playing mimicked a sampled phone conversation between two women in Turkish. Other examples off the beaten path include the gorgeously hip "Counting Miles and Smiles" in an effortless collaboration between the strong rhythm section and Manaf's angular playing alongside verdant reed work by clarinetist Hulhul. A leisurely winding path develops and takes unexpected twists in "Early Years"'s changing moods and tempos; first a tranquil conversation among percussion, flute, and guitar, then a sudden shift into a rocking tempo signatures and styling in the vein of rising guitarist Mary Halvorson.

Manaf's fretboard skills are at the forefront, not only in the usual jazz tradition, but also with his emerging compositional style resulting in music that this is melodic, challenging and surprising. This is captured in his mesmerizing ostinatos in the totally eccentric "Multiple By Zero" and the whimsical "The Sweetest Horn" a piece that contains everything from an 18th century Colonial drum/flute cadence, tropical beats, and lyrical closing. The album also contains 6 tracks from his 2011 release It's All Yours which contains a definite Metheny-esque influence. While not as brilliant as A Man's Relationship with His Fragile Area it is still a worthwhile addition filled with imagination and solid musicianship.

This is a fine introduction to Manaf's multicolored world and where he'll venture next is anyone's guess. His canvas is wide and his ideas are bright and abundant.