A Madman’s Approach To Music And Why Can't Music Be Like A Tree? 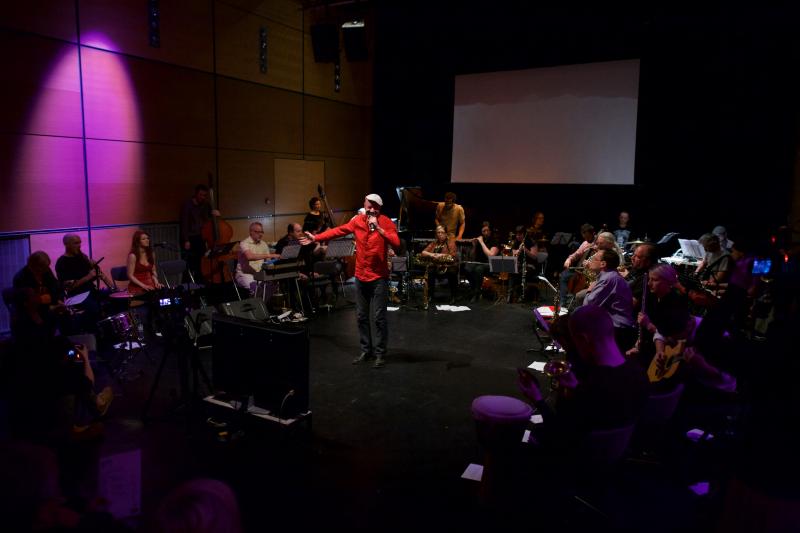 The Glasgow Improvisers Orchestra is unique. It's an over-used word, I know, but in this case fully justified. GIO are unique in so many ways—in the way they formed, the way they make decisions, in their make-up, how they work and most importantly how they sound. They are many things but one thing they most definitely are not is a free jazz ensemble. No tenor sax spits ire and fire and no trumpet wails a discordant blues over a wild rhythmic pulse. The trombones don't compete for attention and the pianist doesn't shatter each moment of peace with frantic atonal lines. GIO sounds as it breathes, as it feels, as it thinks and as it acts.

"Collective" is another over-used word these days. Watching its members gather before the first night of their 7th annual GIOfest last November, it seemed less like musicians preparing for a gig and more like a social occasion. Just people saying 'hello,' catching up, relaxing, glad to be back. Not that there aren't tensions. Music or life without tension—and release—would not be music or life at all but something else entirely. But GIO's music does seem to come from a very different place, one less male-dominated than so much jazz and free improvisation. Talk to any GIO member and the word 'negotiation' is never far from their lips, a genuine collective after all.

GIOfest is a musical gathering of friends. Each November, GIO brings to Glasgow a clutch of old and new co-conspirators to join them at the city's Centre for Contemporary Arts. There'll be people like vocalist Maggie Nicols, pianist Steve Beresford, vibraphonist Corey Mwamba and saxophonists John Butcher and Michel Doneda, all guests this year. And there will be local friends as well such as actor-performance artist Tam Dean Burn or Sonic Bothy, an inclusive new music ensemble that explores, composes and performs experimental and contemporary music.

To date, this vast twenty-five person, pan-musical orchestra has released six CDs, several with friends such as Maggie Nicols, bassist-composer Barry Guy, saxophonists Evan Parker and Lol Coxhill and master improviser-composer George Lewis. Each record succeeds in being distinctive in its own right, unique even, and yet definitive of GIO's sound. The group's last CD, Artificial Life, was a remarkable collaboration with Lewis. Here, the trombonist's goal was a "negotiated" performance less the consequence "of individual freedom" than the "assumption of personal responsibility" by the orchestra's members "for the sonic environment." It was evident throughout that not only did GIO's members grasp that intention wholeheartedly but that its aim reflected directly their own vision. GIO's sound is the sound of its members. Its vision is one of a living democracy of music, art and life.

Reviewing the record for All About Jazz, I suggested that this was the result of each member being able at any moment to "contribute or even shape the direction of the music" by "a process of joining and gently pushing the music somewhere new." The analogy I gave was that of birds in flight. Watching GIO and its friends perform that sense was even more clear. More than that, one could see how 'negotiation' need not imply a consensus resulting from individuals giving up some value or other. Rather it could result in new possibilities that no-one had previously considered.

GIO came into being just over twelve years ago, as founder-member, saxophonist Raymond MacDonald explains,

"A number of us were invited in 2000 by saxophonist Pete Dowling to come and play a graphic score that Barry Guy was presenting as part of the Free Radicals Festival. Evan Parker was curating that year. The piece used a lot of artwork by Alan Davie to provide the iconography of the score. It all went very well and we said, 'We must do this again. We must get a group together and play.'"

MacDonald had begun to be interested in free improvisation and was beginning to explore this in a number of bands and situations and was meeting like-minded players, who were looking for a different kind of outlet for their aspirations. "That's when I started thinking about a large group," he tells me, "that pulled together all the people around Glasgow to meet to explore free improvisation in a large group context."

However, MacDonald's plans had to wait for the right opportunity and that came with the next Free Radicals Festival in 2002. He contacted the people who had played the Barry Guy score together in 2000 and others he knew to be "passionately interested in free improvisation and committed to getting together." Assured of a gathering of some sort, his next step was to approach Graham McKenzie, the festival's director. "I said, 'We haven't done anything since but I think the time is right to do something with a large ensemble of improvising musicians," MacDonald explains. "I said I could guarantee 25 musicians—that was quite bold because I wasn't sure I could -(Laughs) and I asked Graham to hire Evan Parker to run an afternoon workshop. Graham agreed. Evan said, 'Yes," and that for me was the moment GIO was born."

Bassist Una MacGlone was one of those who attended the workshop. "I saw an article in the Herald that said there was an open workshop with Evan Parker at the CCA," MacGlone recalls. "I emailed Ray saying, I'd be very interested in coming along. Ray in his typical welcoming manner said it was okay even though it was a very busy workshop. I'm not sure how the other musicians found out about the GIO project. But that workshop was the beginnings of GIO and in the same manner as when at the Royal Scottish Academy of Music and Drama I switched from cello to the bass -I never looked back!"

The workshop was the turning point for GIO and since then it has evolved from what MacDonald described as a "raggle-taggle bunch of musicians" into something truly valuable with roots in both the community of musicians and in Scotland's rich cultural scene. And that "raggle-taggle bunch of musicians" that came together across the musical spectrum helped shape and define what GIO is musically and socially. Unlike other improvising ensembles such as Italy's Instabile Orchestra, Misha Mengelberg's Instant Composers' Pool and Alexander von Schlippenbach's Globe Unity Orchestra, GIO was never a jazz big band manqué. True, it drew on musicians from Glasgow's fertile jazz scene but it also brought in players from the folk, classical, rock and electronic worlds, as well 'non-musicians.'

"We're clear this is not a group of jazz musicians who are making free music. It's people who are interested in music and doing it spontaneously. The background of the whole thing is important in itself but it's not important that it comes from a certain genre."

Those members who come from classical music do so with very open minds, perhaps as Rossi suggests, encouraged by 20th century composers like Markus Stockhausen, Henry Cowell, George Crumb and Cornelius Cardew, who reintroduced the idea of improvisation into contemporary composition. The decision of those members from electronic music to ally themselves with GIO is easier to explain. The use of such approaches has been a part of contemporary classical music since Messaien and Varèse and also a welcome presence in improvisation circles since the late sixties.

But what would bring musicians from a folk or Scottish traditional background to GIO? Part of the answer lies in the openness of the Scottish music scene as a whole. For example, Glasgow's annual Celtic Connections Festival attracts artists from a range of backgrounds without it ever seeming to be a case of eclecticism for its own sake. The other part of the explanation, however, lies in what Gerry Rossi describes as a Scottish "ethos of curiousness," a willingness to think beyond genre, a virtue acknowledged in the title of GIOfest 2014—"Connected Elements." Guitarist George Burt is one member, who came to the orchestra from a background in both jazz and folk music.

"There used to be a pretty busy folk scene in Falkirk, and I played double bass in my uncle's ceilidh band," Burt tells me, "not because I was a bass-player, just because there happened to be one in the house...I don't know how I managed to keep a functioning liver through those years. I was playing guitar more seriously. Players like John Renbourn, Davey Graham, Martin Carthy. I still love that stuff. Listening to John Martyn was important in my circle of friends, and I followed him into John Stevens, Neil Ardley and so on. That opened up all the Britjazz world."

Burt is perhaps best known for his successful collaboration with MacDonald in the Burt-MacDonald Sextet, one of the most intriguing groups in British jazz. The group's CDs Day For A Reason and BooHoo Fever with pianist Keith Tippett come highly recommended. For Burt and it seems other GIO members, spontaneous improvisation or collective composition, call it what you will, has its own logic and one valid as any of the other backgrounds from which they come.

"I think I've always done it," Burt explains simply. "I'm self-taught and you have to do a lot of mucking about if there's not somebody there to show you how to get a sound. There's always been a lot of DIY music making in the folk scene and the process of making up a bass part for a set of fiddle tunes is very similar to playing a completely free piece, as far as I can see. I remember seeing a connection when I heard about figured bass in baroque music. I also remember being interested in the funny sounds you can get on the guitar very early. As soon as I got one, I was fiddling with harmonics, behind the bridge sounds, rapping the sound board. The percussive approach to the guitar by John Martyn and Kevin Coyne made immediate sense to me."

Watching the ensemble in Glasgow last November over three nights, as different collaborators led, or perhaps better guided, the performance certain things became clear. Some of these 'connected elements' seemed to work better than others, to me at least. Percussionist Gino Robair's duo with John Butcher seemed so dominated by Robair's theatrics that I struggled to concentrate on Butcher's contributions. I wondered too how well the aesthetic of Lemur, the Norwegian improvising chamber quartet, sat with GIO's eclectic approach. Of course, subjective elements can also be connected. As I watched that night sitting with a friend, more a fan of straight-ahead jazz, I became increasingly aware that what he was hearing was not soothing the savage breast so much as enraging it. Perhaps that affected my perception. But these are valid questions too. If all collaborations were to work every time in every situation there would be no change, no development.