A Love Supreme: The Story of John Coltrane's Signature Album

By BRENT WHEELER
January 11, 2003
Sign in to view read count 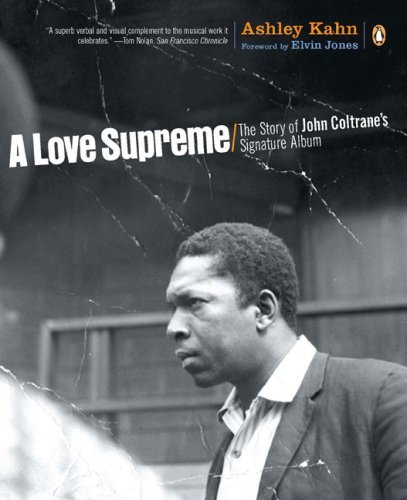 The accepted authority on Trane and the authoritative analysis is Professor Lewis Porter's John Coltrane: His Life and Music, University of Michigan, Ann Arbor, 1998. His is a splendid and immaculate celebration but one leaning toward strict musical analysis and written within an academic tradition. Mr Kahn brings a different perspective in part because his focus is obviously on one work (A Love Supreme) but also because his purpose is somewhat different.

For many the album A Love Supreme is Coltrane at the pinnacle. On every level it is superlative Coltrane. It is therefore, not only of vital interest, but also a logical anchor from which to explore the music, the man and this particular work. That is Kahn's task.

It is perhaps odd that in spite of jazz and matters spiritual having ever been hand in hand, Coltrane it seems was the first to address the two directly, face to face. Countless jazz musicians cite the church, gospel preachers, hymn based chords, melodies, rhythms, call and response patterns—but almost always as influences.

Spiritual elements are ever present in jazz. Religious ideas were prominent from the outset. Later, musicians of the bop, post bebop and hard bop eras reverted to or took Muslim names. The lyrics of jazz abound in religious influence.

Yet Coltrane's Love Supreme involves something different. Love Supreme and Coltrane make jazz music a central tool of spirituality. Jazz fused, not just influenced by or a borrower of spiritual notions, but melded and made one with spirituality in a totally and deliberately explicit fashion.

Kahn documents and analyses this phenomena and, importantly, what others made and continue to make of it. As he did in The Making of Kind of Blue , Kahn achieves this in an approachable, down to earth as well as informative manner. The book is a joy from numerous angles.

Meticulously researched and replete with numerous interviews, quotes, reactions and comments from those closest to the action—the cast sprawls across the jazz landscape well beyond immediate musicians and family -Kahn's work provides great insight into the inspiration and evolution of Coltrane's journey.

He tackles the place of the sideman and the particulars of promoters and critics as well as the working practices of professionals such as Rudy Van Gelder and Bob Thiele. The story, for the topic demands more than simply describing how a famous record was made, is set in a wider context which locates the music without suffocating it in social or historical commentary.

The book itself, at least the hardback, is an excellent object in its own right. The right size and shape to make itself noticed, it is filled with photographs not regularly seen, spiced with quotes, scribbles, notes and produced on quality paper that make it a joy to read and refer to. As with Kahn's Making of Kind of Blue, enjoying the book is a "read listen read listen" project.

Kahn makes especially effective use of contrasting "out takes"—pages here and there detailing related but not central subjects such as the fortunes of some labels, the role of commission distribution selling, the character of certain venues, the atmosphere of specific performances and numerous like topics.

The effect is to bring immediacy to the more analytical material and remind us that for all the deeper issues the book is about great music, magic performances and an exhilaration for everybody involved.

You could be forgiven for thinking that armed with Porter's book and of course the requisite CDs you had Coltrane pretty well covered. Not so. Kahn's is a major addition.

It would never do justice to Coltrane or his work to be any less enthused and involved in writing up "A Love Supreme" than this unique human being evidently was in creating it. That is a formidable challenge. It is one Ashley Kahn has more than met.