By JOEL ROBERTS
June 5, 2005
Sign in to view read count
For years, jazz artists have shied away from A Love Supreme, treating it as somehow too iconic, too hallowed or at least too uniquely tied to its composer to cover. Who would dare try to improve on the perfection the Coltrane quartet achieved on their legendary 1964 Impulse! recording? Wynton Marsalis, that's who. And it's a good thing. As one of the most important, popular and magnificently realized works in the jazz pantheon, A Love Supreme deserves its place in the jazz repertoire, too. Unfortunately, it also deserves a more inspired treatment than Marsalis and the Lincoln Center Jazz Orchestra (LCJO) offer on their new Palmetto CD. 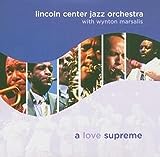 Marsalis' big band version of the Coltrane suite is expertly played by the always- impeccable LCJO, but it's oddly lacking in the passion and spirituality at the heart of the original. The opening movement, the slow-building "Acknowledgment , never really gets off the ground, meandering for ten minutes to a clumsy restating of the familiar four-note theme by each member of the brass and reed sections and a brief vocal chant. The more straight ahead (in Marsalis' hands) middle movements, "Resolution and "Pursuance, are more successful, featuring hard-driving, Ellington-esque horn arrangements as well as blazing solos by Marsalis and saxophonist Wes Anderson, who succeeds in a difficult role by making sure not to imitate Coltrane. The LCJO's superb rhythm section (pianist Eric Lewis, drummer Herlin Riley and bassist Carolos Hernandez) also acquits itself admirably in attempting to fill the shoes of Tyner, Jones and Garrison, making those moments when the rest of the orchestra lays out among the most interesting on the album. But it's only on the closing movement, the plaintive "Psalm, that Marsalis and company finally capture Coltrane's spirit and the music sounds, for once, less like a finely played recital and more like something approaching an epiphany. 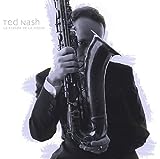 LCJO saxophonist Ted Nash takes a much different approach to the jazz tradition on his new album, also on Palmetto, with his decidedly untraditional quartet, Odeon—a piano-less, bass-less group featuring accordion, violin, tuba, and drums. A great example of an inside/outside player who excels in both mainstream and more vanguard settings (Nash is a member of the progressive Jazz Composers Collective as well as the LCJO), he explores Latin influences here, mostly the tango, offering radically reworked versions of familiar fare like "A Night in Tunisia, "Tico, Tico, and "Concierto de Aranjuez, as well as originals that range from the lushly romantic to a playful avant blues.