Jonathan Poretz: A Lot of Livin' to Do 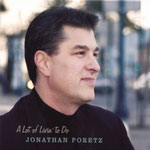 Frank Sinatra's footwear makes for some tough shoes to fill. But judging by A Lot of Livin' to Do, San Francisco-based vocalist Jonathan Poretz has done an able job of rendering Old Blue Eyes in "Tribute to Frank, Sammy, Joey & Dean (The Rat Pack)," a show with performances in San Francisco, Las Vegas and Boston. Not that Poretz sounds like Sinatra on the recording. With a delivery that is closer to that of that of another Sinatra-influenced singer, Bobby Darin, Poretz comes across silky, swinging and cool as hell, sort of a cross between Darin and Mel Torme.

The title tune, a classic American Songbook standard, opens the set, popping to life on some subdued Latin-flavored percussion behind Poretz, who is a bit hushed at first, before the band cranks things up into a more characteristically—for the tune—jaunty mode. And man, can this guy Poretz scat, loose and insouciant—a bit of a lost art, it sometimes seems, in the male vocalist field.

That sets the stage for the rest of the set, which is comprised of a bunch of familiar tunes out of the Songbook: "Come Rain or Come Shine," "I'll Remember April," the always beautiful (and especially so here) Rodgers and Hart jewel "It Never Entered My Mind" and "I See Your Face Before Me." "Just One of Those Things" finds Poretz backed by a flexible rhythm team, along with Noel Jewkes' smoky, moody wee hours tenor saxophone; "I'll Remember April" features his clarinet, and Antonio Carlos Jobim's "How Insensitive" his flute.

And I can't close without mentioning the sound, which is very crisp and clean, with subtle "live" resonance, like a sitting in a small, half-filled nightclub, close to the stage.

A Lot of Livin' to Do; My Time of Day/I've Never Been in Love Before; Then I'll Be Tired of You; Come Rain or Come Shine; How Insensitive; I'll Remember April; It Never Entered My Mind; this time the Dream's On Me; On the Street Where You Live; I See Your Face Before Me; Just One of Those Things.