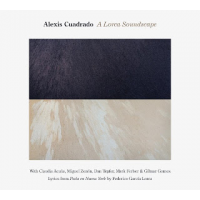 When times are tough, injustice is in the air, and something needs to be said, jazz always finds a way to do the talking. In times past, it was Billie Holiday singing "Strange Fruit" at Cafe Society, drummer Max Roach and vocalist Abbey Lincoln pouring their hearts out on We Insist! Max Roach's Freedom Now Suite (Candid, 1960), bassist Charles Mingus railing against injustice with soul stirring epics, and bassist Charlie Haden sermonizing with his Liberation Music Orchestra; today, it's bassist Alexis Cuadrado looking through a Lorca lens of his own creation.

Cuadrado's A Lorca Soundscape, which came about as a commission from Chamber Music America, speaks to present day injustices, the dark side of New York/American life, and the divide between the have and have-nots by referencing a poetic work that did the same thing more than eighty years before it. Spanish poet/playwright Federico Garcia Lorca arrived in New York in 1929, just in time to witness the stock market crash which triggered The Great Depression. As a result, Lorca was present to bear witness to the sad state of affairs that followed that epic economic meltdown. He noted that he encountered "a spectacle of suicides, of hysterical people and de-moralized groups. A dreadful spectacle absent of grandeur." He used what he saw as inspiration to write Poeta En Nueva York, and the Barcelona-born, New York-based Cuadrado used that work as inspiration for his own protest art, born in the wake of The Great Recession; that's quite a parallel if ever there was one.

On A Lorca Soundscape, Cuadrado combines the bold ("New York (Oficina Y Denuncia)") and the beautiful ("Vals En Las Ramas"), making a statement that protest music need not be ugly or abrasive stuff. Vocalist Claudia Acuna serves as the literal mouthpiece for Lorca's words, delivering statements that are graceful yet undeniably firm, but the music does plenty of talking as well. Cross-threaded ostinatos create a Spanish-seasoned minimalistic introduction over percussion on "Danza De La Muerte," Miguel Zenon's alto saxophone and Cuadrado's bass join forces and paint a mournful yet elegant scene at the outset of "La Aurora," and pianist Dan Tepfer serves as a directional guide on the placid "Vals En Las Ramas."

The music that's presented herein is truly powerful, carrying forth important messages that need to be delivered. Cuadrado has birthed a masterpiece that's linked to the pulse of New York via Spain circa 2013.