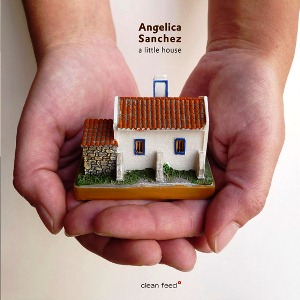 More than any other instrument, the solo piano seems to reveal a deeper glimpse into the musician's insight. This has proven true in recent works like Geri Allen's Flying Toward the Sound (Motema, 2010), Craig Taborn's Avenging Angels (ECM, 2011), and here, with Angelica Sanchez's equally absorbing A Little House .

Sanchez's voice has gained notoriety in working with a coterie of like-minded individuals—saxophonist Tony Malaby (also her husband), drummer Paul Motian, and Wadada Leo Smith's Organic ensemble, as well as with her own band on 2008's superb Life In Between (Clean Feed). While she thrives in these abstract waters, this solo project displays an even broader view of the pianist's musicality.

Dissonant chords intermingle with skittering runs in "Chantico," while popular tunes are completely reimaged, whether in the Brazilian folk song "A Casinha Pequenina" or singer Hank Thompson's country music hit, "I'll Sign My Heart Away," which undergoes a facelift fitted with an old timey "picture show" quality via toy piano. In Sanchez's world these compositions breathe with imagination.

Things grow even more interesting as the album progresses. The pieces switch from vociferous flights ("City Living") to quietly spaced notes ("Glow"). The toy piano's childlike sweetness is transformed into an ominous and eerie personality in "Crawl Space," with a mood that could be taken directly from the 1973 horror film Don't Be Afraid of the Dark. This dichotomy presents itself throughout Sanchez's varied pieces, with moods and tones that move between the shadows of bold inventiveness and gentle empathy. A captivating solo release, from an intriguing pianist.

Chantico; I'll Sign My Heart Away; Along the Edge; A Casinha Pequenina; Stretched; Up and Over; Trickle; Crawl Space; Glow; Giant Monks; Jackaloop; City Living; Mimi.