A Jazz Holiday In Rio 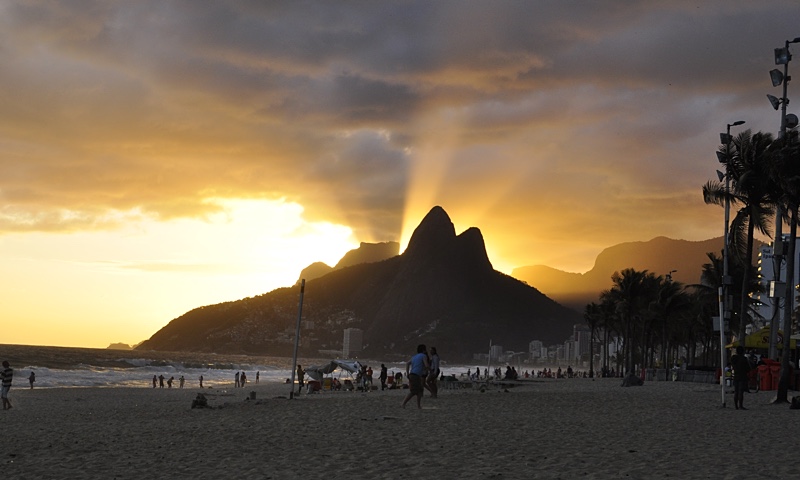 A sojourn to Rio to enjoy nightly jazz and Brazilian music presentations will be a true revelation to those who have not experienced this city’s vibrant music culture up close.

For most, mention a trip to Brazil and what comes automatically to mind is that vast tropical country's annual Carnaval celebration and the lure of its endless beaches. The high season, from December to early March, is when this nation of 200 million receives the most visitors by far. During Brazil's winter season, from roughly from mid-June into early September, when temperatures retreat from summer highs by as much as 30 degrees, foreign visitation becomes just a trickle compared to the hoards that invade during the sizzling months of verão. However, it's an ideal time to consider flying down to Rio de Janeiro. Airlines offer bargain fares, hotels are less expensive; indeed, thanks to the strength of the U.S. dollar against the Brazilian real, the country is more affordable today than it has been in years. And, yes, the beach scene is still active.

A sojourn to Rio to enjoy nightly jazz and Brazilian music presentations will be a true revelation to those who have not experienced this city's vibrant music culture up close. A growing number of clubs today feature well known jazz artists, and virtually every gig affords the possibility of seeing one of the nation's true living legends. Among those still actively performing are pianists Joao Donato and Osmar Milito, the vocal quartet Os Cariocas, bassist Sergio Barroso, and drummer Pascoal Meirelles, among many others. Many of these veterans were influential players in the bossa nova and samba-jazz movements of the early 1960s.

Catching sets in various clubs also affords the visitor to explore some of Rio's more interesting neighborhoods, from historic Copacabana to funky Lapa, a so-called Bohemian district that was once the center of Rio's nightlife, boasting casinos, resident stars like Carmen Miranda, and raucous bordellos.

One of the city's best places to enjoy jazz and Brazilian music is TribOz, an old two story mansion in Lapa that's been converted into a welcoming venue for many of Brazil's best musicians. The club also hosts visiting artists. Recently, two New Yorkers, harmonica wizard Hendrik Meurkens and pianist Clifford Korman, who also teaches at a Brazilian university, did a one-nighter. Artists are usually only booked several weeks in advance, so Rio-bound aficionados should check the club's website for up-to-date information on who is being featured.

Mike Ryan, the owner, is an Australian trumpeter and educator who has lived in Brazil for over two decades. A PhD with degrees in ethnomusicology and philosophy, he calls his venue, somewhat jokingly, The Brazilian-Australian Cultural Centre. An affable host who addresses audiences in softly Aussie-accented Portuguese, he sees TribOz as a place where musicians are treated with respect. Don't expect to hear a blender whining away as a bartender makes someone a cocktail. Before every set, he informs club goers that "TribOz has a restaurant, but it is not a restaurant, and it has a bar, but is not a bar." Although the finger food is scrumptious and the drinks are first class, his point is well made: People come to TribOz first and foremost to experience great music in an atmosphere where the artists on stage are truly respected. Blabbermouths will quickly be asked to leave.

An unheralded space for great music is the second floor bar of the Hotel Novo Mundo, an older but still elegant hotel in the Flamenco neighborhood, close to the Carmen Miranda Museum and the Catete Palace, the former residence of Brazil's presidents when Rio was the national capital. On Tuesday and Thursday evenings, the Osmar Milito Trio entertains, offering low-key but rhythmically-vivacious covers of bossa and jazz standards, featuring a rotating cast of female vocalists. Milito is a historic figure in Brazilian music since he began his professional career in the mid '60s backing such famed artists as Elis Regina, Gilberto Gil, Nara Leão and Leny Andrade. The pianist, composer and arranger toured both Mexico and the U.S., where he worked with Sergio Mendes for two years in the late 60s.

In the heart of downtown Rio, just a block from the Municipal Theater, the city's ornate opera house, Rival is a historic nightclub that features a broad range of Brazilian music idioms, from jazz and bossa nova to samba and up-to-the moment contemporary styles. You might be lucky and catch a set by singer Ivan Lins or guitarist Victor Biglione. Or it might be a local group doing covers of Ramones tunes. In any case, Rival offers the classic nightclub experience, with buckets of ice and bottles of Johnny Walker Red commanding most of the tables.

The music scene in Copacabana has been enlivened recently with the opening of a club with a legendary name—Beco das Garrafas (Bottles Alley). It was in this small alley near the famed Copacabana Palace Hotel were jam sessions that went on until sunrise in the early '60s. The live music provoked the residents of the surrounding apartment buildings to pitch beer bottles into the alley in hopes of sending such jazz musicians as saxophonist Paulo Moura, drummer Dom Um Romao and bassist Tião Neto, among a legion others, scurrying for the exits.

The reborn club features several small performance spaces and artists who might not be well known but nonetheless reflect Brazil's seemingly endless supply of promising talent. Of note, Beco das Garrafas recently featured noted bassist Yuri Popoff and his quartet, so there are always pleasant surprises in the line-up.

Claudio Olivera, co-owner of the Guanabara Records label, keeps a close eye on music happenings in Rio and also suggests Vizta, a club in the Marina Hotel, and Miranda, another new venue that's starting to attract attention. Further, many of the city's busiest young jazz musicians are constantly on the move, and Olivera advises checking the Facebook pages of such artists as pianists Hamleto Stamato and Kiko Continentino, who fronts the Sambajazz Trio, to see where they are performing on any given night. Other artists to keep an eye out for include saxophonists Idriss Boudrioua, Daniela Spielmann, and Mauro Senise, trumpeters Jessé Sadoc and Guilherme Dias Gomes, and pianist Thomas Importa. As astute visitors will quickly learn, Rio and its jazz club scene are a winning combination.