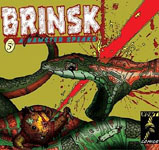 If only from the title, A Hamster Speaks and the anime/manga cover art, where a very battered and partially mechanically enhanced hamster is saving his world from an evil viper, you know that you are in for a trip—and quite a wonderful trip it is.

Upright bassist and composer Aryeh Kobrinsky formed Brinsk to incarnate his vision (or, if you will, hallucination) of hamsters singing classical operatic arias over metal-rock based rhythms. However, the band is acoustic and is made up of Kobrinsky along with trumpeter Jacob Wick, tenor saxophonist Evan Smith, Adam Dotson on euphonium and drummer Jason Nazary.

Wide-ranging creativity is natural for Kobrinsky as he is a member of a loose group of Brooklyn-based musicians that make up such bands as Girlfight (violinist/violist Tanya Kalmanovich, Wick and drummer Fred Kennedy) and theSuiteUnraveling (guitarist Lily Maase, Kennedy, bassist Matt Wigton and Smith), as well as the equally open Kenosha Kid, headed up by guitarist Dan Nettles.

Whatever label one might choose for this music, there is no doubt as to the sincerity, honesty and musicianship of Kobrinsky and the band, plus it is clear they are having a good time and it is infectious. Overall, the album does have the feel of a soundtrack or an operatic orchestration in that the music is dramatic and the performances highly emotional.

The makeup of the band, which has no chordal instruments, is important to its overall sound. The brass instruments are each of different types: cylindrical bore (trumpet), which has a tight, harder edged sound, conical bore (euphonium), which has a softer, rounder sound, and the reed, which adds a woody undertone to the metal. Each player is a virtuoso in his own right and the arrangements balance the sound of a metallic choir against a driving, hard-edged rhythm section, against solo lines that exist individually and in counterpoint.

The music ranges from thematically centered, arranged compositions to free-form improvisations with and without a rhythmic voice. Four of the tracks, "Mrs. Zurne," "The Gun I Used To Use," "Laser Eyes" and "Wet Blanket" are listed as band compositions, as opposed to the others, which are by Kobrinsky. These tracks vary in texture and cohesion, but are nonetheless as dramatic as those that have a more formal structure, such as the killer "Svensfagel" and "A Hamster Speaks."

The journey can be wild and woolly, but it is never boring and indeed frequently engrossing. It is easy to imagine this band completely taking over a performance space playing this jazz-rock "opera."