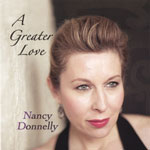 For her recording debut, vocalist Nancy Donnelly comes prepared with the exceptional trio of pianist Peggy Stern, bassist Jay Anderson, and drummer Matt Wilson. Altoist Jack Ryan appears on only one track, contributing a tart solo on Donnelly's original "Why Can't It Be?" The leader delivers these tunes in a bright manner that is reminiscent of the quintessential 1950s femme vocalists. She does well with both ballads and up-tempo tunes.

Originally from Kingston, New York, Nancy Donnelly has her parents to thank for an exposure to a wide variety of music. She studied classical voice at an early age and graduated from the Crane School of Music. She then moved to Boston to attend the Boston Conservatory of Music and studied jazz theory and improvisation with Jerry Bergonzi. After moving to New York, she has worked with Joe Locke, Roswell Rudd, Bob Moses and Peggy Stern.

The opener, Bernice Petkere's "Close Your Eyes," is taken at a faster tempo than usual. On Thad Jones' jazz standard "A Child is Born," she lends improvisation to the second chorus. The Kern/Mercer standard "Dearly Beloved" is played way up-tempo with a Latin tinge. The Russell/Sigmund "Crazy He Calls Me" is given a nice and smoky cabaret ballad treatment.

Jay Anderson starts off the Schwartz/Dietz tune "Alone Together" with a brief bass statement, and then Donnelly takes it out for a ride with a pleasant scat solo. She saves the best for last. The Rainger/Leo standard "If I Should Lose You" was made for a jazz vocalist, and Nancy Donnelly proves up to the task. Taking the piece at a mid-tempo pace, Donnelly uses the same technique as with "A Child is Born," applying jazz phrasing on the second and third chorus to the timeless melody; she also provides a scat solo set against Peggy Stern's piano.

Donnelly wisely varies the pacing of the album so that no two successive songs are at the same tempo, with one exception. Three songs, all originals, flow well together at the same mid-tempo pace: Donnelly's "No Greater Love, Kurt Nurock/C.J.Ellis' "Lost Is Loving You" and Peggy Stern's "New Rain." The technique works because it makes the listener pay more attention to these tunes than if they were presented separately.

Close Your Eyes, A Child is Born, Why Can't It Be?, Dearly Beloved, Crazy He Calls Me, No Greater Love, Lost In Loving You, New Rain, Alone Together, If I Should Lose You.