By FLORENCE WETZEL
September 16, 2012
Sign in to view read count 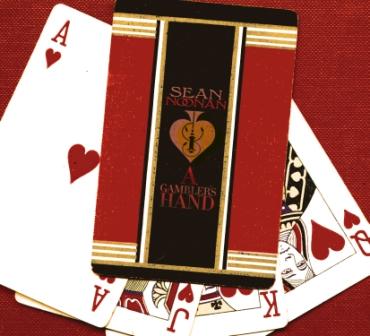 Drummer Sean Noonan's A Gambler's Hand is an innovative musical suite that explores the world of a compulsive Irish gambler who finds himself trapped inside a wall. The project was conceived during a period when Noonan lived in a basement apartment and had a mysterious next-door neighbor; a man he never saw but could often hear screaming and pounding on the walls. Noonan thought perhaps his music and drumming would comfort the man, so he tried to communicate with him through the drums. This experience, combined with Noonan's ongoing interest in folklore and the work of playwright Samuel Beckett and the theater of the absurd, led Noonan to create this surreal musical tale, as well as a thirty-minute silent film where Noonan plays the gambler.

The project's musical configuration is also unique. Noonan has selected four of contemporary music's most talented and versatile string players, who bring his compositions to life with aplomb and create compelling improvisational interludes. However, instead of taking the traditional role of the drummer and sitting behind the band, Noonan sat in front of the group so the five players formed a circle. Noonan says, "I thought it would be quite interesting to intertwine or overlap the strings and percussion and treat it all as one organism." And, indeed, the group plays throughout with a superb cohesion and sense of one-mind creativity.

Each of the ten songs on the CD are full of beauty, with standouts including the luscious title track, which creates a wonderfully moody atmosphere—there's nothing like strings to depict the inner quiver of human emotions. "Caught in the Act" is full of urgency and passion, with Noonan's drums driving the strings to a heightened fury and flurry, and "Lully" has a lovely melody line, with the strings creating both a sweet poignancy and a nightmarish undercurrent. "I Feel the Clouds" is calmer, depicting a brief interlude of contentment in the gambler's tortured existence, and the CD ends with the exquisitely fragile "Monster of Solitude," going further into the crevices of the gambler's emotional world.

Noonan and the group are to be commended for this tremendous achievement, an imaginative and ingenious work that combines the power of storytelling with top-notch musicianship. The subject matter is also quite brave: Noonan goes right into the roots of loneliness and compulsion, the walls that we all get trapped in and the ways we try to express ourselves from within those flat, suffocating spaces. It's always inspiring when an artist takes a chance on a unique vision, and it's especially so when they succeed as beautifully as Noonan has on A Gambler's Hand.

A Gambler’s Hand; Caught in the Act; Lully; Banshee Dance; Thank You; Ghost Quarters (Improv Canon); Triptych (A Far, No Silence/Forced Meatballs/A Far, So a Far); I Feel the Clouds; Courage Unleashed; Monster of Solitude.