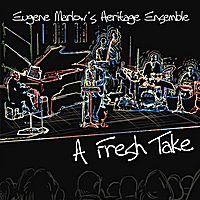 A Fresh Take is Eugene Marlow's third album of songs from the Hebrew tradition. It builds on the foundation of the excellent Celebrations (MEII Enterprises, 2010) but rather than extending the Heritage Ensemble's repertoire still further, it reworks the tunes on the 2006 debut, Making The Music Our Own (MEII Enterprises). It's unusual to find a band revisiting its back catalogue so early in its recording career, but keyboardist/leader Marlow has a clear justification for the move, explaining that the band's lineup changes, evolving arrangements and expanding musical palette led to his desire to rerecord those early tunes.

In fact, while Making The Music Our Own was released in 2006, the recordings date from 1986 and 1995. With the exception of Marlow, the Heritage Ensemble on Celebrations and A Fresh Take is a completely different one to that of the debut record. Musically, the most obvious change came with the presence of drummer Bobby Sanabria and percussionist Cristian Rivera on Celebrations. Both players bring their Latin stylings to the Hebraic melodies, delivering syncopated, swinging beats while still maintaining their spirituality.

When Sanabria and Rivera are in full flight on "Avinu Malkeinu" or "Hatikva," they set up an irresistible groove with inventive and dynamic style, unfailingly promoting a positive and upbeat approach readily adopted by the rest of the Heritage Ensemble's musicians. This is particularly apparent on "V'Taher Lebeinu / Yis Ma Chu," where Marlow and bassist Frank Wagner really take flight. Marlow moves from fat, rich, chords to delicate, light-touch runs with ease. Wagner creates some pounding, swinging bass lines that drive the music forward with tremendous energy and enthusiasm. Saxophonist Michael Hashim once again brings the most directly Middle Eastern sound to the band, particularly on the soprano sax.

There's one new song on A Fresh Take—"Adon Olam," featuring Rachel Kara Perez's pure, soaring, vocals. If it's an indication of a new direction for the band, then its mix of tradition and a more contemporary and freely-improvised approach points to a very interesting future, indeed. Marlow's Heritage Ensemble continues on its intriguing, groove-laden and inspiring musical journey. Long may the trip continue.