Peter Brotzmann/Paal Nilssen-Love: A Fish Stinks From The Head

By MARK CORROTO
December 6, 2013
Sign in to view read count 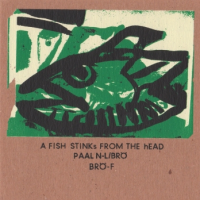 In his seventy-second year, Peter Brötzmann shows no signs of decline. The fire-breathing saxophonist and hero to all free jazz musicians embarked on yet another tour, releasing this limited edition recording (only 400 copies) with a silk screened cover A Fish Stinks From The Head with drummer Paal Nilssen-Love who is 33-years his junior.

Recorded in April, 2013 at Cafe OTO in London, the two- track disc packs a Herculean blast into just 33 minutes of music. But then, connoisseurs of such matters know this. The saxophonist has recorded many stunning duets with drummers. Early on, in the 1970s, there were sessions with Dutch swinger Han Bennink. What followed from there were duos with Sabu Toyozuni Live In Japan (improvised Company, 1982), Hamid Drake The Dried Rat Dog (Okka, 1995), Walter Perkins The Ink Is Gone (BRÖ, 2003), Michael Zerang Live In Beirut (Al Maslakh, 2005), Nasheet Waits Live At The Bottle Fest (BRÖ, 2005), and a disc with drummer turned vibraphonist Jason Adasiewicz Going All Fancy (BRÖ, 2012).

The title track kicks off like a wildfire, Brötzmann's tenor yowling over the furious drumming of Nilssen-Love. The pair threaten complete combustion for the first half of the track. Next, the saxophonist lays out for the drummer's solo which recruits Brötzmann to switch to his taragato, and a more earthy sound. When the drummer pauses, Brötzmann's solo prowls, employing goose honks, as Nilssen-Love works cymbals and smaller parts of his kit. What appears to have begun as contretemps, ends with an agreeable snaking consensus.

The shorter (at 10:20) "Range Of Night" opens with a gentle saxophone passage and mallets on drum and cymbals. For lack of a better term, this "ballad" begins softly enough, before it unleashes Nilssen-Love's arms and legs, wielding sticks in a most physical campaign in alliance with the eternal sounds of Brötzmann's horn.

A Fish Stinks From The Head; Range Of Night.